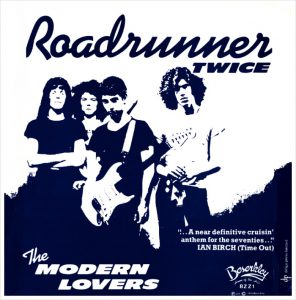 One of the most joyous, primal songs ever recorded, “Roadrunner” by The Modern Lovers is a serious contender for The Greatest Rock ‘n’ Roll Song ever, full stop. I’ve listened to it and loved countless times. Weirdly enough, though, that Modern Lovers version wasn’t even the first version of “Roadrunner” I heard.

In fact, in the late 1970s “Roadrunner” was one of those songs I read about without actually hearing, one of those songs that you’d read about as a huge influence on punk rock, but nearly impossible to find. In fact, I’m pretty sure the first time I actually heard any version of “Roadrunner” was the Sex Pistols half-homage half-desecration from The Great Rock ‘n’ Swindle, which I bought as an import in spring of 1980. It’s where they start playing “Johnny B. Goode” — the ur-source of Steve Jones’s riffs — but Johnny Rotten realizes he doesn’t know any of the words, so he starts yelling for them to play “Roadrunner,” and when they do, realizes that he doesn’t know any of the words to that one either, and makes a hash of the whole thing.

So it was an inauspicious introduction, to say the least. I still liked it though, and was curious enough to hear a “proper” version find what was the only extant version I could find in 1980. That was a compilation called Beserkley Chartbusters Volume 1 (SPOILER ALERT, there was no Volume 2), featuring a bunch of Bay Area artists like Earthquake, The Rubinoos and Greg Kihn. Plus a handfull of songs by non-Bay Area artist, Jonathan Richman, one of which was “Roadrunner.”

Therefore, for a longer time than I’m comfortable admitting, the Beserkely Chartbusters version was the only Jonathan Richman version I knew. Credited to Richman solo, it was longer and slower that the original, and because it had the Greg Kihn Band backing him instead of Jerry Harrison, David Robinson & Ernie Brooks, much slicker. Still, it was “Roadrunner,” for fucks sake, which mean I fell for it. But I didn’t see what all of the fuss was about.

And so for the longest time, the whole “Roadrunner” thing was confusing, of course. While the original Modern Lovers Because while the version of “Roadrunner” from The Modern Lovers was recorded in 1972, it wasn’t released until 1976, while the Beserkely Chartbusters version was recorded and released in 1975. Even weirder, Beserkely slapped both versions on a 45 in 1977, and it became a #11 hit in the U.K., after the Sex Pistols had recorded it (but long before they released it).

Luckily, the Modern Lovers album was at KFSR. And because of that, I heard the original version of “Roadrunner,” and everything came into focus.

Has any song — and I’m including “Born to Run” and “Fun Fun Fun” and anything else you could possibly name — ever conveyed the absolute fun it is to be young and alive and just driving around blasting tunes that you love? It’s an even more remarkable accomplishment when you discover that the song is derived from “Sister Ray,” and they’ve somehow been able to take the dark drone of the Velvet Underground and turn it into the rock ‘n’ roll equivalent of the goddamn “Hallelujah Chorus,” an act of subversion that is at the heart of “Roadrunner’s” greatness.

At first the verses speed by, Richman piling on the words and imagery while Jerry Harrison circles around him with swoops and swirls from his organ.

Said welcome to the spirit of 1956
Patient in the bushes next to ’57
The highway is your girlfriend as you go by quick
Suburban trees, suburban speed
And it smells like heaven

And then of course, Richman breaks the song in half by issuing his thesis statement, one of the greatest declarations anybody’s ever made in any song.

I said roadrunner once!
Roadrunner twice!
I’m in love with rock ‘n’ roll
And I’ll be out all night
Roadrunner
That’s right

It’s at this point — with Richman scraping at his guitar followed by Jerry Harrison boring through mountains with his organ — where “Roadrunner” changes into something almost unknowable, or really, uncatchable. You can try to catch it, but just when you think you’re going to, you run splat into a mountainside painted like a tunnel, or even worse, skedaddle right off of a cliff into thin air, held aloft only by the fact that you haven’t yet looked down. And when you do, you know that the Modern Lovers are still barreling ahead, tearing up the road, singing with the radio on.

At this point, of course, “Roadrunner” has already qualified as an amazing song, an all-time classic in every aspect. So they level up with a totally unexpected call-and-response.

There may not be any better musical moment than that first “radio on!” It simultaneously comes out of nowhere and has been anticipated with each two-chord crash that’s preceded it. And I’ve sung it everywhere, under every possible circumstance: in my car, in my shower, with my friends, while writing these words because it’s lovely and perfect and joyful and more alive than life itself.

After that, the band is shouting “RADIO ON!” as if their very lives depend on it, which they probably do while Richman rambles and declaims and preaches about all of the places he’s going go and things he’s going to see and to and experience with the radio on. Like a roadrunner.

At some point during Sedan Delivery Mk II, I tried to learn the two chords of “Roadrunner” — pretty sure that Doc showed me — as I had the plan that we would all switch instruments during the late-in-the-second-set garbage time, when covers ruled, and I would stand in front of an audience with a guitar and a band and sing fucking “Roadrunner,” and then my life would be complete.

Alas, it never happened. Maybe we tried it once in rehearsal, but its just as well, because we wouldn’t have ever come close to this wonderful, amazing performance.