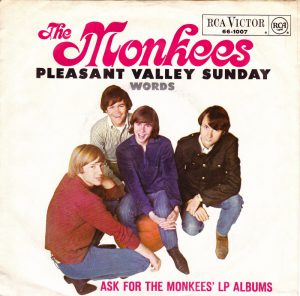 Because he played the goofy jokester on the TV show and his miming of the drums during the videos was pitched somewhere between “can’t play” and “don’t care,” people tend to overlook the fact that Dolenz was a helluva singer. There’s a reason that it’s his voice on most of their hit singles, and nearly all of the rock ‘n’ roll songs on their initial albums.

But just listen to his performance on “Pleasant Valley Sunday:” a bit low-key in the verses, and then taking off in the choruses, with Jones & Nesmith in tow. Then, on the near-psychedelic bridge he totally nails the end, reaching for the sky with way he sings “scenerrrrrrrrrrrreeeey.” It’s so great that he doesn’t even bother to sing any words for the next verse, singing “ta-ta-ta-ta” instead, as drummer Eddie Hoh crashes against himself.

In the end, of course, “Pleasant Valley Sunday” starts circling in on itself, until it fades out into a hail of distortion and fuzz.