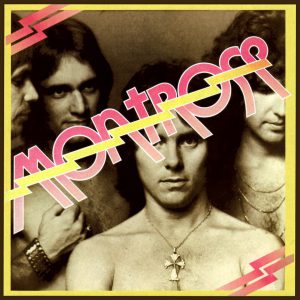 Yes. I know. Sammy Hagar. These days, he’s mostly known for tequila and replacing David Lee Roth in Van Halen, a choice that was artistically inversely proportional to how commercially successful it was, but Montrose the band and the album was where he made his reputation, and pretty much the only time I could ever stand him.

And even then, it was kinda dodgy: I wasn’t sure which song I was going to write about from Montrose, and for awhile, I thought it was going to be “Bad Motor Scooter,” — for the cool motorcycle noises Ronnie Montrose makes — until I realized that it was about a guy who was demanding that a chick ride for hours on the titular scooter over to her place so he could fuck her. So even then, he was kind of a scumbag. Though given that Sammy only knew one way to rock, she probably only did it once.

So of course, it had to be “Space Station #5,” because here at Certain Songs, we love songs about SPACE!!

“Space Station #5” opens with Ronnie Montrose’s guitar floating aimlessly around the heavens, stalled out, trying to get its engine going. To no avail. Floating, drifting, sputtering in the deep dark black void of space. And then all of a sudden, with one last chirp, the rockets are engaged.

Or something. There’s a whole extended section in the middle about the dying of the Earth and the need to get off of the planet, but it’s the galaxy-sized (not brained) chorus — drummer Denny Caramassi is in five places at once — that makes “Space Station #5” so classic.

Oh, what a time we had
Livin’ underground
I move to station number five
See you next time around

The weird thing about “Space Station #5” is that Ronnie Montrose doesn’t really have a proper solo: its pretty much all riffs, or quick little riffs throughout the mid-section. Only at the end, does he start taking a solo, but thy then it’s too late, as the whole song suddenly gets sucked into a black hole, and speeds up until it collapses in on itself.

It was definitely Craig from across the street who turned me onto this album, because it wasn’t on the radio all that much, didn’t have any hit singles, and didn’t sell very well at all, only making #133. But over the years — no doubt driven by Hagar’s success as a solo artists and Van Halen — its reputation grew to the point where pretty much anybody who loved 70s hard rock had to check it out.