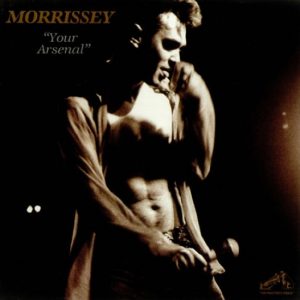 Obviously, we’ll do a deep dive into The Smiths when the time comes (both a promise and a threat!), but for now all you need to know is that I was pretty much devastated when they split up in 1987. While I enjoyed Johnny Marr’s session work with the Talking Heads and his live work with the Pretenders, it was Morrissey who humped up and started releasing solo albums immediately: 1988’s Viva Hate and 1991’s Kill Uncle, the former of which I disliked and the latter which I’m still not sure I’ve ever heard.

So when I read that 1992’s Your Arsenal (a joke which I literally just got today) had more of a tougher rock sound than anything he’d been on since The Queen is Dead, I was intrigued enough to wander down the street to Ragin’ Records and snag a used copy.

And yeah, everything I had read was right. With stone cold legend Mick Ronson as the producer and guitarists Alain Whyte and Boz Boorer setting their guitars for an amalgam of rockabilly and glam, Your Arsenal stands as Morrssey’s best solo album, with the music and melodies of songs like “Glamorous Glue,” “You’re The One For Me, Fatty” and the (in retrospect, totally) problematic “National Front Disco” as bright, immediate and catchy as any mid-period Smiths single, if not quite as ground-breaking.

My favorite of the bunch was the closer “Tomorrow,” which illustrates the strengths of Your Arsenal: big guitars playing off of each other, solid beat, and lyrics that could only come from Stephen Patrick Morrissey:

Tomorrow
Will it really come?
And if it does come
Will I still be human?
All I ask of you is one thing that you never do
Would you put your arms around me?
I won’t tell anyone

At the end the song, Morrissey has typically upped the ante. Now all he wants is for you to tell him that you love him. Even if you don’t mean it. Just tell him already, and maybe he’ll leave you alone. Because the more you ignore him, the closer he’ll get.

After that, his guitarists take over with an extended bit full of repetition and jangle until “Tomorrow” crashes into a random piano bit to end the album. And so, after having been out on Morrissey, I was suddenly back in for the next few albums.