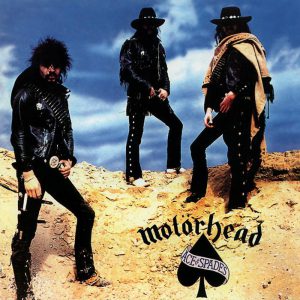 With both Clarke and Taylor in about 15 places at once, it doesn’t even matter that Lemmy mixes up his gambling metaphors.

Of course, the lyrics don’t really matter in a song like this: what matters is the transfusion of the bands energy straight into your central nervous system, which is helped by the fact that “Ace of Spades” is catchy as hell. Not melodic, per se, but definitely catchy.

And just when you think it might get repetitive, there’s a clever stop-time part that breaks the song in half

That’s great enough, but Lemmy tops it, just before the guitar solo, by yelping “And don’t forget the JO-KER!” as Clarke’s guitar upends every single table in the joint with a rapid-fire flurry of notes.

“Ace of Spades” is great good fun, as perfect of a representation of Motörhead’s take on rock ‘n’ roll as any song they ever did, and it even made #15 on the U.K. pop charts, because why the hell not?