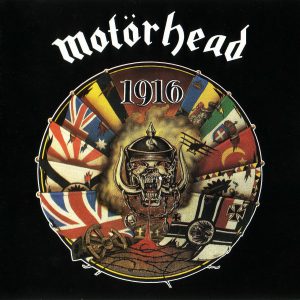 While I had great respect for Motörhead and enjoyed their take on rock ‘n’ roll, I also didn’t need to be completely up on them, especially during my indie-rock-snob 1980s. So while first Motörhead album that I ever bought was their absolutely bruising 1981 live album No Sleep Til Hammersmith, it took me ten years to buy another one.

That would be 1991’s 1916, which I noticed had a spate of unusually good reviews, as Motörhead just kept doing their thing over the years and occasionally more people than their core fan base would notice. I’m guessing that the Ramones tribute was what people noticed about this record — one band that people thought all their songs sounded the same praising another — it was the philosophically hooky “Voices in the Sky” what got me.

With “Fast” Eddie Clark long gone, replaced by Phil “Wizzö” Campbell — who joined in 1984 and stuck until Lemmy’s death — and Michael “Würzel” Burston, while prodigal Phil “Philthy Animal” Taylor sat behind the drum kit, “No Voices in the Sky” showcased an unusually woke Lemmy.

Nobody gives a damn about anybody else,
Think everyone should feel
The way they feel themselves
Rich men think that happiness
Is a million dollar bills
So how come most of them O. D. on sleeping pills?

This is sung at the normal lightspeed pace — Lemmy was in his mid-40s at this point, with no sign of slowing down — as any great Motörhead song, but what set “Voices in the Sky” apart more me was the near sing-along chorus.

With a pair of long guitar solos in the middle and at the end, “Voices in the Sky” delivers a visceral god-denying gut punch that will stay in your head long after the song itself is over.

That said, I didn’t dig back into Motörhead until 2013’s Aftershock, and they’re yet another band about which I remain woefully underknowledged, even if I pretty much know all of their moves at this point. Or think I do.

“Voices in the Sky”