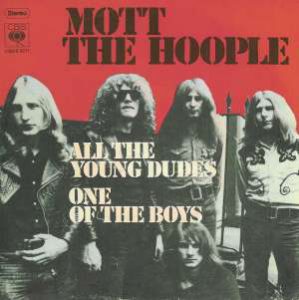 In late 1971, Mott the Hoople had kicked out four albums of Rolling Stones meet Dylan hard rock in two years to almost zero acclaim and even fews sales and were on the verge of breaking up. However, one of their fans was former Monkee David Bowie, who offered them a song.

That song was “Suffragette City,” which — in what turned out to be a good decision all around — was turned down the band, and so Bowie wrote “All The Young Dudes” for them instead. He also offered to produce the album, as well, the second of the three breakthrough albums David Bowie would produce in 1972.

The other two: The Rise and Fall of Ziggy Stardust and The Spiders From Mars, and Transformer. Have a 1972, David Bowie.

Starting off with a long, arcing guitar lead from Mick Ralphs and anchored by Verden Allen’s haunting organ throughout, the big hook for “All The Young Dudes” is, of course, the handclap(!) assisted chorus that dominates the last half of the song. But for me, what totally sells “All The Young Dudes” is Ian Hunter’s sly, sympathetic lead vocal, especially on the last verse.

And my brother’s back at home
With his Beatles and his Stones
We never got if off on that revolution stuff
What a drag
Too many snags
Well I drunk a lot of wine
And I’m feeling fine
Gonna race some cat to bed
Is this concrete all around
Or is it in my heeeeaaaadddd?

The 1960s are over, is what “All The Young Dudes” is saying, and we can get the 1970s rolling if we can just get all the young dudes together. See the dudes. Hear the dudes. Relate to the dudes. Kiss the dudes. Especially the one in the glasses.

“All The Young Dudes” was a modest pop chart here in the States and a massive smash in the U.K., where its slow anthemic build, homoerotic subtext — OK, text — and name-dropping lyrics aligned Mott The Hoople with the burgeoning glam-rock scene, always a bigger thing in the U.K. than it was here.

“All The Young Dudes”


Video for “All The Young Dudes”