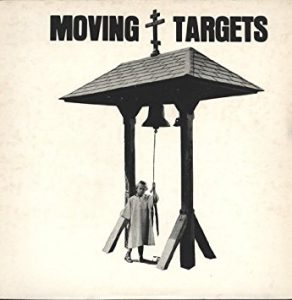 From the moment I heard Hüsker Dü’s unholy fusion of hardcore noise and pop melodies on records like Zen Arcade and New Day Rising, I wanted other bands to kick out their own versions.

If Boston’s Moving Targets weren’t the first band to take up the challenge, they were pretty damn close, because I remember hearing Burning in Water when it showed up at KSFR in 1986 and wondering what took so long.

Like the Hüskers, Moving Targets was a power trio: singer/songwriter/guitarist Kenny Chambers provided the concept and context, while bassist Pat Leonard and drummer Pat Brady provided the execution: the Moving Targets were as tight as fuck, equally adept at pummeling rhythms and soaring harmonies.

All of which you could hear on “The Other Side,” the shimmering opening track of Burning in Water, the first of four great-to-good albums by Moving Targets.

Starting with a massive riff from Chambers, followed by Leonard & Brady roaring in, but rather than the rougher vocals of most of their peers, the singing on “The Other Side” was smooth as all hell: totally unexpected in this context, yet making perfect sense, and leading the way for other punk-pop bands with more melodic singers like Lemonheads or Goo Goo Dolls.

That said, it was impossible to ignore the chorus of “The Other Side”

It’s hard to stress how weird the juxtaposition of angelic harmonies and massive noisy speed still sounded in 1986 — and Pat Brady’s ride cymbals sounded like the bells of heaving ringing in front of the gates of hell — and I fell hard for “The Other Side,” as well as “Always Calling,” the other great song on Burning in Water, a record that I’m pretty sure I found at Rasputins during one of the roadtrips up to Berkeley to buy records and see concerts.

Of course, the world being what it was in the 1980s, Burning in Water was the only Moving Targets album I heard until I stumbled across the rest of their catalog on an .mp3 blog in the mid-2000s. Turns out all of the follow ups — 1988’s Brave Noise, 1991’s Fall and 1993’s Take This Ride — have worthwhile songs, though the slickness of their sound eventually overtook the roughness.