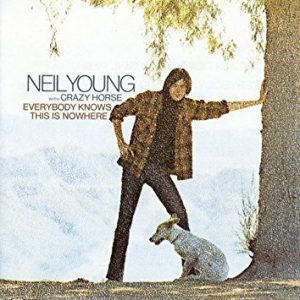 Album: Everybody Knows This is Nowhere
Year: 1969

In my imagination, Danny Whitten was as surprised as fuck.

But let’s back up a hot minute, shall we? Because “Down By The River” isn’t just a song with a unprecedented guitar solo; it also stands as a dark murder ballad, as well as a song with an insanely catchy chorus, trigger warning for shooting his baby down the river, of course.

And all of that has already happened by the time Young gets to that first solo. In fact, there’s a bit of a misdirection at first: Danny Whitten takes a short lead at the beginning of the song, lazily guiding the song into the first verse:

Be on my side, I’ll be on your side, baby
There is no reason for you to hide
It’s so hard for me staying here all alone
When you could be taking me for a ride

And at this point Danny Whitten and Ralph Molina chime in with the background vocals:

At which point they all join forces — Molina playing controlled quick rolls on his snare after each line — because in for a penny in for a pound:

Now at this point, anything can happen, and indeed they all wander around a bit, until Neil unleashes a frightening volley of notes, surprising the shit out of everybody, and — just for a second — “Down By The River” stutters — Whitten’s rhythm guitar faltering for just a skosh before he lurches forward, eagerly following the crazy disjointed sequence of notes that Neil seems to be playing.

If, in 1969 nobody was quite prepared for the superamplified blues that Jimmy Page unleashed upon the world, at least that had a clear antecedent; the “Down By The River” guitar solo must have felt like it was beamed from outer space, especially when laid on top of slow, sparse murder ballad with a ghoulishly gorgeous chorus.

Neil’s second solo starts with way less fanfare, it’s incredibly wandery, meandering around the forest that’s near the riverbank, until it suddenly explodes in a torrent of notes like a fishing wire crazily trying to wrap itself back together.

Interestingly enough, Neil’s solos are a bit undermixed: listening on headphones, both Billy Talbot’s bass and Danny Whitten’s rhythm guitar are much higher in the mix than Neil’s leads, which might indicate a bit of a lack of confidence in it, but actually serves to add to the surrealistic nature of the whole thing. Did I actually hear that? I need to hear it again.

Because it could work as both a song and a jam, “Down By The River” has actually be covered a lot. Not only did we do it in Sedan Delivery, artists as diverse as Dave Matthews, Indigo Girls & Michael McDonald have covered it over the years. Hell, funk drummer Buddy Miles had a version get to #68 on the Billboard charts in 1970, which is better than Neil did.

Almost 50 years later, “Down By The River” remains an utterly timeless classic, forever deep and mysterious, and impossible to ever fully grok.

“Down By The River”


CSNY performs an amazing version of “Down By The River,” 1970


CSNY performs an different amazing version of “Down By The River,” 1970


“Down By The River” acoustic w/ Bruce Springsteen, 1989 (this might be the moment where Neil & Bruce swap destinies so that Neil has a great 90s and Bruce has a terrible one)