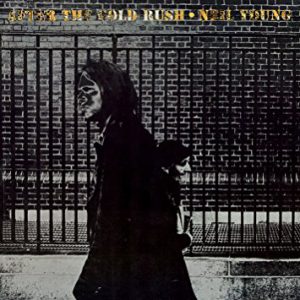 While Everybody Knows This is Nowhere was divided into obviously major songs and, er, not major songs, its follow-up, 1970’s After The Gold Rush, is one of the most consistent albums of Young’s entire career.

Consistent in terms of song quality, that is. Not so much sound, because while After The Gold Rush is mostly acoustic in nature, it’s not entirely acoustic, as Young stuck electric guitars on “When You Dance, I Can Really Love” and tossed out one of his greatest weird guitar solos at the end of “Southern Man.”

The vast majority of After The Gold Rush was recorded by the band that would put out the Crazy Horse debut album the next year. The core trio of Danny Whitten, Billy Talbot & Ralph Molina were augmented by Jack Nitzsche and wonderboy Nils Lofgren.

One of the first things that Neil did was have Nils play piano, an instrument with which he wasn’t completely familiar — shades of what Bob Dylan did with Al Kooper on “Like a Rolling Stone” — and then stuck him way up in the mix.

Of course, at first you really don’t notice the piano, stuck all the way over there in the right speaker, as “Southern Man” almost instantly opens with an all-vocals-on-deck rebel-rousing challenge:

During this opening, and the subsequent verses and choruses, “Southern Man” moves at an almost lackadaisical pace, but during the instrumentals, the tempo shifts up, and suddenly Nils’s piano is driving the rhythm almost effortlessly forward, playing the same riff over and over again — exactly like he would be if he was playing the rhythm guitar he probably would have rather been playing.

But what it does is give Neil tons of space to experiment with his guitar solos, and in fact, his first solo kinda sneaks in slowly, so you don’t even really notice it until it’s in full flight and he’s slamming notes against each other, then stretching them out, and finally leaving giant spaces between whirlpools of notes until they slow down for another round of lyrics.

“Southern Man” wasn’t ever a single, but it definitely got tons of FM airplay for both its topical nature — and thank gods we don’t have to deal with that anymore! — and fantastic instrumental breaks. And of course, it was “Southern Man,” along with its inferior-in-every-aspect sequel, “Alabama,” which riled up Ronnie Van Zant enough to riposte with the immortal “Sweet Home Alabama,” which of course tickled the fuck out of Neil Young, and he and Van Zant eventually became friends and mutual admirers.