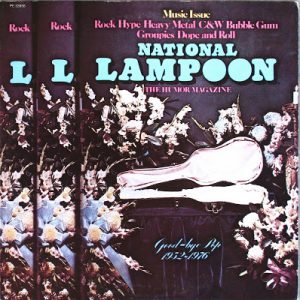 Goodbye Pop 1952-1976 had an absolutely stellar cast of musicians, writers and comedians. Bill Murray, Paul Shaffer, Gilda Radner, Sean Kelly, and the triple threat who wrote, acted or played on every track on the record: Christopher Guest.

In the earlier “A History of The Beatles,” it went like this:

Then we went to Hamburg in Gerrrrrr-mini with Tony Shernidan. And he was dead! George turns around and says: “You call that a backbeat? Oh, Tony’s dead.”

“Room service for Mr Sheridan.” “No, he’s dead in the bed, I’ll take those rolls, please.”

If you like that kind of silliness — and I did in 1980, and still do nearly 40 years later — it got even more surreal with the history of Neil Young, which has at least two jokes that I still use constantly.

Later, he he joined Crossnee, Ogden Nash, and Mr. Stillman. But then he was…he was dead then! After that. On no! Poor Neil, dead as a doorna…ob. “He was? How?” The coronary asked. “He might have died in his own frow-up,” I said. Could he have been a drug abuser?

His death was a great loss to both Rock and Roll.

And if you don’t think that last joke is one of my all time favorite jokes by anybody, you haven’t been paying attention. I have used, stolen and referenced it so many times in the previous decades, it’s not even funny. Except, of course, for the fact that it’s still hilarious.

“A History of Neil Young” is immediately followed by Tony Scheuren’s hilarious mash-up / parody “Southern California Brings Me Down,” which mixes and matches the last half-decade of Neil Young songs into something that sounds a helluva like not just a good Neil Young song, but a great Neil Young. Certainly more than “A Horse With No Name,” even if Scheuren’s vocals are a little bit high and smooth and so you have to squint a bit with your ears to fully appreciate it.

I dreamed I saw my cowgirl housewife
I was drivin’ in my pickup through L.A.
I wanna love you while I can, babe
Before I become an old man

There are two genius bits in “Southern California Brings Me Down.” The first is the chorus — which is just a repetition of title over and over again — nearly as pretty and melodic as top-shelf Neil, and chock full of the kick-kick-snare rhythm, steel guitar and backing vocals that characterized the Neil of Harvest & After The Gold Rush

The second genius bit is the guitar solo, done by a guy name Paul Jacobs, which first quotes from Stephen Stills’s run in “Ohio“, then immediately quotes from “Down By The River” and “Southern Man” while eventually turning into what would be a pretty cool totally original Neil Young guitar solo.

In any event, with Goodbye Pop long out of print, and Neil Young parodies somehow having been hijacked by Jimmy Fallon, this might all seem a bit superfluous, but I figured that a bit of silliness after the darkness of the ditch trilogy would be a good idea, especially since I’m guess that a lot of y’all might never have heard this.

“A History of Neil Young / Southern California Brings Me Down”