But it’s the cover of the Arc disc that I love the most. 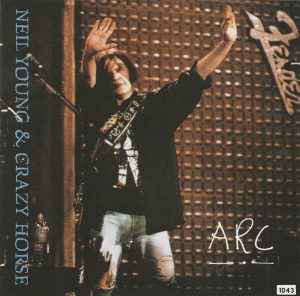 It’s Neil in front of one of the giant prop amps they brought back out for this tour, guitar slung behind him, face waxy with effort & sweat, holding up his hands like the aliens in their silver spaceships had just entered the arena and he’s trying to wave them off because the show isn’t over yet.

The Arc disc, BTW, is essentially a half-hour of feedback and lyrical snippets, and the best use I ever found for it was that Halloween — the week after the album came out — when I stuck my speakers in the window of Tower District apt on Linden, and put it on repeat to freak out all of the trick-or-treaters while I went out for the evening.

Well, the cop made the showdown
He was sure he was right
He had all of the lowdown
From the bank heist last night
His best friend was the robber
And his wife was a thief
All the children were killers
They couldn’t get no relief
The bungalow was surrounded
When a voice loud and clear
Said, “Come on out
with your hands up
Or we’ll blow you out of here”
There was a face in the window
The TV cameras rolled
Then they cut to the announcer
And the story was told

And the packaging matched the music inside: whereas Live Rust was designed to be a capstone to one of the best decades any musician had ever had, Weld was more like a crazed, cranked celebration of both a muse rediscovered and a fellowship that was perhaps on shakier ground than it seemed.

And so while Weld reprised every song from the electric disc of Live Rust, every version was hoarser, rawer and more desperate than it had been a dozen years prior; an ethos that also permeated the Freedom & Ragged Glory songs that made up most of the rest of the album. Especially “Crime in the City.”

There’s still crime in the city,
Said the cop on the beat,
I don’t know if I can stop it
I feel like meat on the street
They paint my car like a target
I take my orders from fools
Meanwhile some punk
Blows my head off
When I play by their rules
That’s why I’m doin’ it my way
I took the law in my hands
So here I am in the alleyway
A wad of cash in my pants
I get paid by a ten year old
He says he looks up to me
There’s still crime in the city
But it’s good to be free

“Crime in the City” was one of the songs that featured in the run-up to the release of Freedom, I definitely remember reading about it — apparently there were like a zillion verses — prior to hearing it. And while the album version was fine — recorded with the Bluenotes — it was also low-key and mostly acoustic, despite the fact that even with the Bluenotes, Neil was playing a noisy version in concert.

But on Ragged Glory, “Crime in the City” was totally and utterly cranked, Neil anchoring the song with a melodic guitar hook that appeared and disappeared at will, Crazy Horse choogling throughout. On Freedom, “Crime in the City” was delicate and dynamic, but live it’s one screaming howl of despair, especially after the second verse, when Neil screams “Freedommmmmmmmmm!” like he’s pretty sure he’s never going to find any.

Now I come from a family
That has a broken home
Sometimes I talk to Daddy
On the telephone
When he says that he loves me
I know that he does
But I wish I could see him
I wish I knew where he was
But that’s the way
All my friends are
Except maybe one or two
Wish I could
see him this weekend
Wish I could walk in his shoes
But now I’m doin’ my own thing
Sometimes I’m good, then I’m bad
Although my home has been broken
It’s the best home I ever had
Yeah

One of Neil’s more Dylanesque songs — it’s not a coincidence that its followed on Weld by their Gulf War hymnal version of “Blowin’ in the Wind” — there are at least three verses missing from this utterly cranked “Crime in the City” which showed up on other versions. That said, they all come to a head in the batshit crazy final verse.

Well, I keep gettin’ younger
My life’s been funny that way
Before I ever learned to talk
I forgot what to say
I sassed back to my mom
I sassed back to my teacher
I got thrown out of Bible school
For giving the finger to the preacher
Then I grew up to be a fireman
Put out every fire in town
Put out anything smokin’
But when I put the hose down
The judge sent me to prison
He gave me life without parole
Wish I never put the hose down
Wish I never got old
Wish I never got old
Old
Ollllld

I love the way his voice breaks on the word “old.” Like he can’t quite bring himself to believe that he’s actually growing old. In February 1991, Neil Young was 45 years old, which seemed old to my 28-year-old self, but less old than 34-year-old Neil seemed when I discovered him at 17. And what seemed more important was the fact that he was still kicking out the jams at this level.

A quarter-century later, in the twilight of the gods, I kinda wish that all of my favorite rock stars were still 45, but of course that’s not how it works, is it?