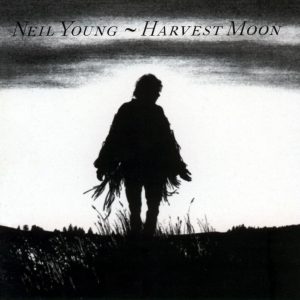 Recorded at Redwood Digital on September 21, 1991

I know that the title track to Harvest Moon seems to have been the one that has stuck around the most in the last quarter-century, and while it’s a perfectly lovely song — and had the really cool idea of using a broom as a percussion instrument — it just never became one of my favorites.

I preferred the slightly dramatic “War of Man;” the ode to a great dog, “Old King,” (and dig how Neil makes the banjo bark throughout); and today’s subject, “Dreamin’ Man.”

Like most of the best songs on Harvest Moon, “Dreamin’ Man” features some great acoustic guitar work from Neil, in this case, an almost Spanish motif that comes in after the chorus, which stops the song dead in its tracks for just a bit before Kenny Buttrey & Tim Drummond start it back up.

Meanwhile, Nicolette Larson & Neil’s sister, Astrid provide counterpoint vocals throughout, singing the title of the song at strategic moments during the verses.

I’m a dreaming man
Yes, that’s my problem
(Dreamin’ man)
I can’t tell
When I’m not being real
In the meadow dusk
I park my Aerostar
(Dreamin’ man)
With a loaded gun and sweet dreams of you

For me, when Neil sings that he’ll always be a dreamin’ man, he’s clearly making excuses for his ongoing restlessness — which makes sense, given that he’s always had more ideas and plans than anybody will ever be able to fulfill — and trust me, I get that completely.

And it makes the outro that much more poignant, as Neil continues to call himself a dreaming man, while Nicolette & Astrid point that it’s a problem. But of course, it’s not like he’s gonna change.