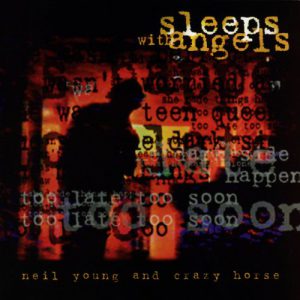 So while David Briggs might not have been responsible for Neil’s ongoing wanderlust and eccentricity, he certainly enabled it as well as anybody could, resulting in all of the classic albums above, and yeah a few duds, too. In any event, Sleeps With Angels was the last album Neil did with David Briggs — the seventh with Crazy Horse (not counting After The Gold Rush & Tonight’s The Night, which were Crazy Horse albums in all but name) — and you can still hear them tinkering with the formula.

Sleeps With Angels was darker and dryer than any previous NYCH album, with a series songs that were long on atmosphere, but somewhat lacking on the melodic tip, which is why I’ve always admired it more than loved it.

But of course, that wasn’t the news hook for Sleeps With Angels: the news hook was the title track, inspired by Kurt Cobain’s suicide, the accompanying note of which quoted “it’s better to burn out than to fade away,” which kinda fucked Neil up, given that he’d been trying to figure out whether he should contact Cobain and offer advice during the tumultuous lead-up to the suicide, which you might remember was more of a culmination than a surprise.

That said: while the title track was the only one written and recorded after the suicide, the general aura of darkness and experimentation somehow fit the times, even on the long, jammy “Change Your Mind,” which — at least from the title — felt like it could also have been written for Cobain.

Sparse and simple on the verses, driven by a two-note Billy Talbot bassline and the reliably slow and steady drums of Ralph Molina, “Change Your Mind” took off during its chorus, where Neil & Frank “Poncho” Sampedro jingle-jangle-jingle their guitars as Neil & Crazy Horse do one of the prettiest call-and-response choruses they’ve ever done.

And speaking of Poncho: “Change Your Mind” is his finest quarter-hour. While he’s always been a slightly underrated rhythm guitarist — what is Crazy Horse if not underrated? — but his rhythm work on “Change Your Mind” is utterly stellar, recalling the work that Danny Whitten did on “Down By The River,” where the lead/rhythm split was far less obvious.

This is especially true during the quieter passages, where Neil is slowly exploring various tones and phrases, while Poncho is drawing slow circles around Neil’s guitar. Check out the magic halfway through the second solo where Neil & Poncho are practicing the ancient art of weaving, before Neil just explodes with distortion & echo, eventually setting up the third verse.

“Change Your Mind” was a highlight of the second time I saw Neil Young & Crazy Horse: at the 1994 Bridge School show with Sherilyn & Kim. While I’ve always detested the Shoreline Ampitheatre with the force of 1000 white-hot suns, we did have relatively good seats, and it wasn’t just NYCH who played that year, but also Pearl Jam and Tom Petty & The Heartbreakers (where it was Stan Lynch’s final appearance with the band).

In any event, the amazing thing about the nearly 20-minute version of “Change Your Mind” that they pulled off was that it was totally and entirely acoustic. Neil, Billy & Frank were all playing acoustic guitars (Billy’s was a bass, natch), and Ralph Molina played with brushes, not sticks. And yet, they were somehow able to main the same intensity as if they’d played it with electric instruments. An utterly unforgettable performance.