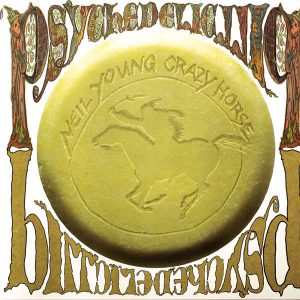 I don’t love Americana as much as its biggest fans, nor dislike it as much as its detractors (or dislike it at all, actually), but for me, it was just table-setting for Psychedelic Pill, which turned out to be my favorite Neil Young & Crazy Horse album since Ragged Glory two decades prior.

The thing about Psychedelic Pill is that it was made for people who thought that at 14:00, “Change Your Mind” wasn’t long enough, so it spreads itself across two CDs, opening with the 27:36 of “Driftin’ Back,” to date the longest song on any Neil Young album. I mean if you don’t count “Arc,” I guess. Or the bonus track on the Blu-Ray version of Psychedelic Pill, the 37-minute “Horse Back,” which is one half jam session and one half “Cortez The Killer.”

Because why shouldn’t Neil Young & Crazy Horse have a song that’s longer than any songs by Genesis or Yes or Pink Floyd? Or longer than the entirety of Zuma? I mean, was any of this strictly necessary?Sure, us crazies and die-hards will always welcome new music from the man, but still probably not, yet the fact that Neil Young doesn’t really need to write and perform any new music is definitely part of the reason he still does, especially when he hits upon a song as affecting as “Ramada Inn,” the story of a pair of empty nesters.

As always, “Ramada Inn” is just a handful of chords playing against each other, Neil playing leads whenever and however he feels like it, but when Crazy Horse sings the pre-chorus without Neil, it’s as emotional as all hell.

Most of the song takes place in a Ramada Inn near the Grapevine on a roadtrip to visit some friends. It’s clear that they’re at a crossroads, in a weird space after their kids have left, but as Neil’s lonely chorus makes clear, some things remain the same.

So will they make it? The song is unclear, even as Neil piles waves and waves of sympathetic guitar, which tells us he’s rooting for them. If he wasn’t, the guitar solos would be dissonant, noisy and disjointed.

Both the unresolved story and the melody of “Ramada Inn” are as classic as Neil Young & Crazy Horse get, though my guess is that only a fraction of people who might love this song have ever heard it, and it definitely would have been a highlight of Alchemy, the live album recorded and subsequently shelved from their 2012 tour, for, you know, reasons.