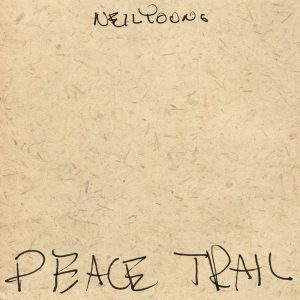 If it please the court I’ve had a lot to say
And it’s not always been true
Standing here before you, judge
I make my pledge of truth to you

When people say that Peace Trail seems unfinished, a song like “My Pledge” is no doubt what they’re talking about: drummer Jim Keltner sticks to a basic pattern — which if you listen hard enough is basically the kick-kick-snare Neil Young beat — while bassist Paul Bushnell does quick little runs, while Neil provides only the most rudimentary guitar.

Meanwhile, Neil isn’t really singing, but rather reciting, words that fuck around with time and space. Just like he’s always done. Which is why he remains a great storyteller but an unreliable narrator.

But here’s the thing: nearly every single line of “My Pledge” has weird robotic echo — no doubt that damn auto-tune — that ends up providing the melody of the song, while Neil continues to confess that no matter how alive he feels, time still takes its crazy toll.

I’m lost in this new generation
Left me behind it seems
Listening to the shadow of Jimi Hendrix
“Purple Haze”, sounding like TV

Or later on, after verses referencing Florence Nightengale, “Abraham, Martin & John” and the day the music died:

Sure. Neil Young volunteered for the Navy. Right. But as he repeats several times at the end of the song, that’s his pledge, judge.

As the judge, I find Neil Young not guilty on all charges except for being a musical artist from whom I will glean enormous pleasure for the rest of my life.

I realize that writing about sixty of his songs probably seems excessive, but no other artist I love this much — not even Bob Dylan — has been the same combination of prolific and masterful for so long, meaning that I really felt like I owed it to myself to do this. And a cool day to end it on, as my band that was heavily influenced by him is getting together today for the first time in over a quarter-century, because it’s never too late to move forward.

And as always, I can’t wait to see what he does next.