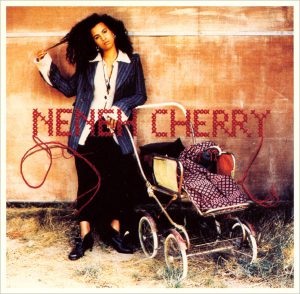 Here is what “Trout” has: two big rock samples, Steppenwolf’s “The Pusher,” and “When The Levee Breaks;” lyrics about safe sex; and lead and backing vocals by Michael Stipe.

And if that isn’t early 1990s enough for you, it also has a rap by Michael Stipe. Look. Ya’ll know that I love R.E.M. beyond measure and reason, and their lifetime pass was issued by the mid-1980s. But I gotta admit that this whole song is corny as shit, and I love it for its corniness.

So after Cherry sings:

It’s not terrible. But of course, I’m biased, so it might very well be terrible.

One thing is for sure: it’s totally sincere: there isn’t even a hint of irony here in either the words or the delivery of the words, though somehow they end up with Stipe rapping nearly all of the alphabet — because they’re talking about school, I guess — and while that doesn’t quite work, the chorus where they both sing “round and round and round” totally works, especially over Bonham’s sampled hallway boom boom.