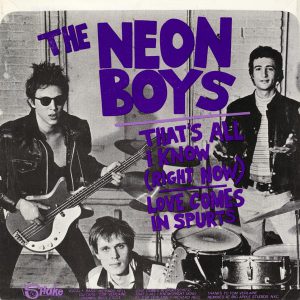 All these years later, I can’t imagine anybody interested in this not having already heard it, but even if you haven’t, you can pretty much guess what it sounds like just from that amazing picture on the sleeve: Billy Ficca standing hands outstretched with a half-grin behind his tiny drum kit; Tom Verlaine barely even in the shot but making sure his guitar is; and Richard Hell practically inventing punk rock right there on the spot, already double-plus cool in his shades, spiky hair and king-hell attitude.

Of course, none of this would have mattered if “That’s All I Know (Right Now)” wasn’t completely overflowing with awesomeness. Opening with a rough rhythm from Verlaine over which he’s already making ridiculous noises, Hell instantly jumps in with a lyric about having his head spun ’round by a new lover.

And with Ficca crashing and rolling like a fiend — a far cry from the precision-tooled parts he would play on Marquee Moon and Adventure — Hell sets his vocals to Maximum Dylan on the actually pretty catchy chorus.

And then Verlaine’s off to the races, spitting out licks like barbed wire snapping from a fence post, and while he somewhat reins it in for the second verse, by the time of the bridge, he’s filling up every available space, as well as some unavailable spaces for pretty much the rest of the song.

And while Verlaine had already pretty much started soloing even before this bridge, he then unleashes an torrential series of individual notes, each one sounding alternately excited and completely terrified to even exist before being obliterated by the next one.

Verlaine’s guitar playing here is brilliantly amateurish — all of the willingness to explore that characterized his later work with almost none of the technique — and more than anything else, it’s what makes “That’s All I Know (Right Now)” such an up: while the whole song is white-hot, his guitar leads are the sound of someone encountering pure energy from the ether and trying to capture it before it completely explodes.