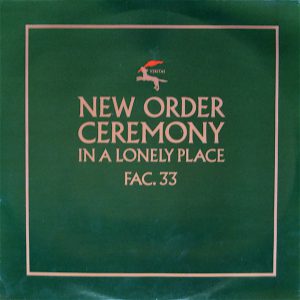 But because nothing is ever easy, I need to instantly point out that praise applies to this specific version of “Ceremony” — often referred to as “Ceremony (Version 1)” — which came out in March of 1981 as a 12-inch single with a green cover, and not the version that ended up on Substance, which is therefore the one that most people know.

The version on Substance was recorded in November 1980 after Gillian Gilbert joined the band, but the original recording was just Bernard Sumner, Peter Hook and Stephen Morris, working out their grief just months after their entire world was forever changed by the suicide of Ian Curtis.

There is a timeline, of course, where Ian Curtis never killed himself, and “Ceremony” was just the next Joy Division single. Weirdly enough, I still think they get into dance music, as once Sumner & Morris (and even Peter Hook) discovered technology, there was no turning back, and besides, on songs like “She’s Lost Control” & “Isolation” they were already angling in that direction.

But of course, in our universe, Ian Curtis killed himself on May 18, 1980. As you can imagine, it was a completely fucked up time for his band mates: they were literally going to hop a plane for their first U.S. tour the next day, and both “Love Will Tear Us Apart” and Closer were on the verge of being released.

Not knowing what else to do, Sumner, Hook & Morris decided to carry on, knowing instinctively that their musical chemistry was not only utterly unique, but it was also just getting going. And because “Ceremony” and the b-side “In a Lonely Place” were the last things they’d written with Curtis — they did demos just weeks prior to his death — in September of 1980, they decided to record both songs as both a closing of and transition from Joy Division.

At that point, noone even knew who was going to sing, but after all three tried eventually Sumner won out, though his vocal was fearful and tentative, buried underneath loads of reverb, as well as glorious tumult the newly-christened New Order had made.

This is why events unnerve me
They find it all, a different story
Notice whom for wheels are turning
Turn again and turn towards this time
All she asks is the strength to hold me
Then again the same old story
Word will travel, oh so quickly
Travel first and lean towards this time

These might or might not have been the lyrics that Ian Curtis had written — Sumner had to electronically dig out his vocals from a shitty demo tape to figure out what they were — but they’re the words that Sumner sang, after one of the most breathtaking opening minutes any rock band has ever produced.

At first it’s just Peter Hook playing jangling majestic notes so high that you might have confused them for a guitar riff. He’s followed after a few seconds by Stephen Morris circling the bass with his hi-hat, spinning like Tony Williams on “Shh/Peaceful” and then Bernard Sumner slicing through like barbed-wire — nothing fearful or tentative about his guitar — then after a pause and a build, Sumner finds the four-note hook I’ll be singing in for the rest of my life.

At this point, Hooky slides away from the jangling notes and plays a more traditional rumbling bassline, while Morris is still underplaying his snare, and then after he starts singing, Sumner alternates his main four note hook with a nearly-as-cool five note hook.

Oh, I’ll break them down, no mercy shown
Heaven knows, it’s got to be this time
Watching her, these things she said
The times she cried
Too frail to wake this time

And then Sumner takes off with a short lead that matches any of the great leads he’d already done in Joy Division, using his trick of doing the same notes but slightly higher the second time around, as he sets up the final verse, his vocals doubled and tripled and yet still not quite breaking through

Oh I’ll break them down, no mercy shown
Heaven knows, it’s got to be this time
Avenues all lined with trees
Picture me and then you start watching

And that this point, Sumner rains down a hail of liquid crystal guitars over the rest of the song, and it is fucking majestic, totally and completely beautiful, especially as Morris continues to whack his snare three times every fourth measure and Hook’s bass carries the whole thing like an army convoy.

What is “Ceremony” even about? Is it a coded suicide note? Is it an affirmation of love? On Genius, one annotator has taken the title to mean “Wedding Ceremony” and is sure that it’s a happy song, but that seems to be at odds with every single thing we know about Ian Curtis, especially given his actions almost immediately after writing it.

And that’s fine: I’ve never needed to know exactly what “Ceremony” was about, what I needed was how Sumner’s voice broke as he sings that coda underneath all of those beautiful guitars, and what I needed was almost another full minute of instrumental, as Sumner, Morris & Hook say goodbye to the first era of their career and hello to the rest of their lives.

I’m not sure when I realized just how much I loved “Ceremony” — hell, I’m not even sure if it’s New Order’s best song, not when “Temptation” & “Age of Consent” still roam the earth — but I do remember that 30 years ago, I made a mixtape called “The Greatest Tape Ever,” which was specifically comprised of songs that I always turned up louder when they showed up on other mixtapes, and the very first song, the one that set the stage for everything else to come, was “Ceremony.”