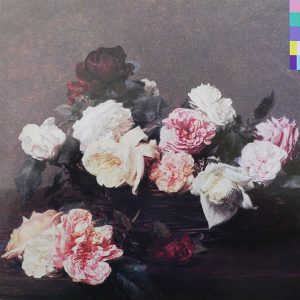 That synth wash is followed by Bernard Sumner playing a short solo on the melodica, a hand-held keyboard that you blow into, and an instrument I still primarily associate with reggae records. The thin, lonely sound of the melodica made a nice contrast with the majestic synths and full-on drum machine beat, not to mention Sumner’s downbeat lyrics.

A thought that never changes remains a stupid lie
It’s never been quite the same
No hearing or breathing
No movement, no colors, just silence

And while “Your Silent Face” is mostly dominated by the electronic elements, it wasn’t really a dancefloor song: more like a chill-room song where even the Peter Hook bass runs hew close to the main melody, and Sumner’s guitars don’t ever really get scrappy.

But none of that matters: one of the strengths of the album cuts on New Order’s mid-1980s albums is that they continued to experiment with tones and sounds and rhythms while developing a trademark sound. And so while “Your Silent Face” didn’t sound at all like “The Village” or “Age of Consent” or “586,” when Hook and Sumner circled each during the instrumental breaks, it was still unmistakably New Order.