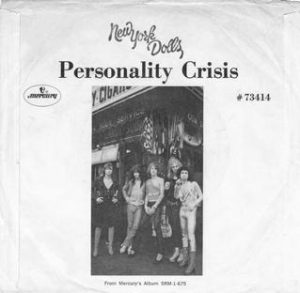 This is all an oversimplification, of course, but what isn’t is that when New York Dolls came out in 1973, it rocked harder than the Faces, was looser than Aerosmith, and felt as decadent as the Stones. As lead guitarist Johnny Thunders slashed and scraped like a house on fire, “Personality Crisis” just exploded out of the speakers, as Todd Rundgren’s production allowed them to run wild without ever completely falling apart.

And that was the key. With Sylvian Sylvian’s piano and Thunder’s guitar battling against David Johansen’s vocals, you always had a choice with “Personality Crisis”: either concentrate hard to figure out what was going on, or sit back and let it wash all over you. Lord knows that Joe Strummer & Mick Jones were paying attention, because if you chose the former, it would surprise you with its hidden sophistication, and if you chose the latter, you could just randomly scream “Personality crisis!” whenever Johansen screamed it.

That was always my choice, as well as waiting for my favorite part.

It’s kind of a mess, but it’s a glorious irresistible mess, and a great way to kick off their debut album.