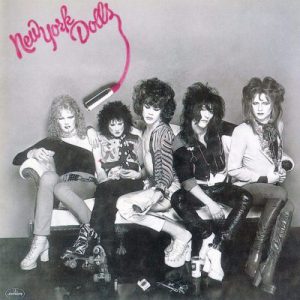 It’s possible, of course, that drugs would have fucked the Dolls up regardless of their success, and yet 45 years later, “Trash” seems like such a prototypical mid-1970s hard rock single it’s still hard for me to understand why it went nowhere.

But maybe, for all of it pop-friendliness, it’s still too unconventional: “Trash” either doesn’t have a chorus or is all chorus, utterly exploding out of the box from the opening second.

With Johnny Thunders not-quite-harmonizing on the word “Trash” and drummer Jerry Nolan alternating between rumbling on his toms and a double time backbeat, it’s instant excitement, so naturally they slow it down a bit.

And please don’t you ask me if I love you
If you don’t know what I’m doing, up my nose!

And that’s pretty much it: alternating faster and slower parts, with some amazingly cool high-pitched “ooooooooooooooh” backing vocals, Johnny Thunders piling on the guitars as the song progresses until Johansen stops it in its track to ask a very pertinent question:

How do you call your lover boy?

This effectively starts the song over, only it doesn’t take very long for things to get crazy again, and “Trash” roars to its conclusion with guitars blazing, drums speeding “whoa whoas” and “yeah yeahs” and Johansen exclaiming to Trash that they’re definitely the one and pleading with them not to fuck things up.

But, of course, they’re going to.

It’s entirely possible that my ears have been warped by listening to hundreds maybe thousands of songs influenced by “Trash,” and yeah it’s got a weird structure, but “Trash” is all hooks all the time, witty and speedy and completely lovable on every level.