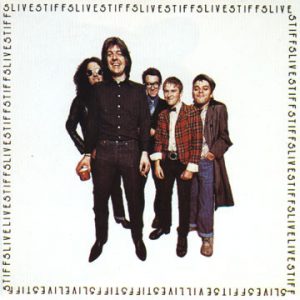 And so in the autumn of 1977, they put together a tour filled with future immortals — Nick Lowe, Ian Dury, Wreckless Eric and Elvis Costello — as well as the hippie-looking Larry Wallis and called it the “Live Stiffs” tour, with the idea that everybody would share musicians, though by this time Nick had 3/4 of Rockpile together and Elvis had all of the Attractions backing him up.

The tour was enough of a success that Stiff put out an album & film called Live Stiffs Live, the highlight of which was Nick Lowe’s furiously hilarious “Let’s Eat,” a 50’s-style rock song done up at punk speed, dominated by Penny Tobin’s organ and some merciless drumming by Rockpiler Terry Williams & Attraction Pete Thomas, and yet remains obscure enough for me to have to transcribe the lyrics from the listening to the song like a dweeb rather than look them up on the web like a civilized person. The things I do for my tens of readers!!!

In any event, while the verses are fun and fine, “Let’s Eat” is all about the chorus, which is an absolute hoot on every level.

With Dave Edmunds — whose partnership with Nick had already started on Dave’s 1977 album Get It — right there in place for the harmonies and a quick crazy guitar solo it’s one Nick Lowe’s all-time greatest hooks, almost totally irresistible on every level.

Not to mention that even though if it’s also kinda silly, at least it’s also on-brand for a guy who had an early single called “Food” that featured a particularly bad Bob Dylan impersonation, and who named his band for this tour “Nick Lowe’s Last Chicken in the Shop.”

That said, when Nick made his first proper solo album, there weren’t a lot of songs about food on that record — outside of “Marie Provost,” heh — having moved on to writing about music and the music industry, and eventually, love and sex. But we’ll talk about all that in the next few days.