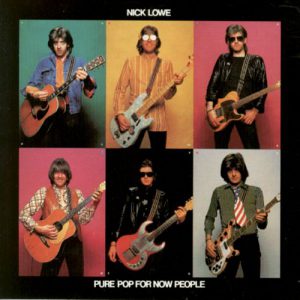 It’s also the first single released by the legendary Stiff Records, way back in 1976, as Nick went into the studio with Rumour drummer Steve Goulding in tow, and came out with a song that was almost beyond catchy from the opening guitar / drum salvo, which leads directly to the first verse.

With a chord sequence and light-hearted beat reminiscent of the Lovin’ Spoonful’s “Do You Believe in Magic?” but with more of a rock n roll feel, “So It Goes” rides on the tension between the bouncy music, Nick’s half-amused vocals and a chorus that steals equally from Kurt Vonnegut and the Beatles.

One of the super cool things is the production on this chorus: Nick is doubled in wide stereo on the first “and so it goes” of each line but all alone in the center for the second one, giving the illusion that he’s doing a call-and-response with himself.

Because Nick is playing all of the guitars and the bass, “So It Goes” is pretty lean and sparse — with only a quick low-down guitar solo after the second chorus to break things up — and his bassline on the verses is an absolute marvel, gluing the the whole song together, especially on the the second verse, which is completely unrelated to the first verse, and something I can see in my mind’s eye.

In the tall building
Sit the head of all nations
Worthy men from Spain and Siam
All day discussions with the Russians
But they still went ahead
And vetoed the plan
Now up jumped the U.S. representative
He’s the one with the tired eyes
747 put him in that condition
Flyin’ back from a peace keepin’ mission

I mean, “all day discussions with the Russians” is an eternal internal rhyme, and one of my most favorite things, except that I want to know more about the life of the U.S. representative and his peace keeping mission. But of course, I never will. So it goes.

As I mentioned, “So It Goes” was recorded in 1976 before Nick started working with Dave Edmunds — which didn’t happen until they joined forces on Edmunds’ Get It album — not to mention the rest of Rockpile, so I was gobsmacked to discover that there was an re-recorded Rockpile version of “So It Goes,” which featured Edmunds harmonizing on the chorus, a slightly different melody line and Billy Bremner playing the guitar solo.

I don’t think it’s quite as good as the version I’ve loved for 40 years now, but had it been the only one I knew, I’d probably still love it.


“So It Goes” (Rockpile version)