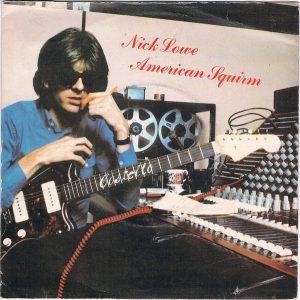 In any event “American Squirm” was probably the peak of how intertwined Lowe and Costello were at the time. It was originally issued as a single in the U.K., but was quickly overshadowed by the b-side, Elvis & The Attractions utterly ferocious version of Lowe’s “What’s So Funny About Peace, Love and Understanding,” and failed to chart in the U.K.

And so while it wasn’t on the U.K. version of Labour of Lust, Columbia decided to put it on the U.S. version, where — even though the rhythm section was Pete & Bruce Thomas not Lowe and Terry Williams — it fit perfectly with all of the other fucksongs that Lowe had written.

I made an American squirm
And it felt so right
On screen was a musical worm
Deep, deep into the night

Yes I was living in a wonderful world
Everything was fine
Tried to mate in a horrible state
Deep, deep into the night

It’s kinda cool, how well Elvis Costello’s voice fits in with Nick Lowe’s, and how much his crack rhythm section fits in with the song, especially when their builds make an nice underpinning of the ridiculously catchy chorus.

That’s pretty fucking cynical right, there, of course, but right on par with songs like “Dose of You,” “Switchboard Susan” and “Skin Deep,” and in the end, Nick is chanting “it goes on and on and on” while Elvis is countering with “deep deep into the night” and it’s absolutely magical, the kind of musical worm to which Nick was referring in the first place.