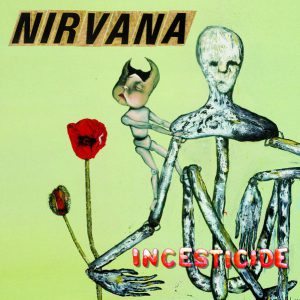 It was summer of 1992, and buoyed by a gig I got as part of a rotating stable of Fresno Bee guest columnists — I could still represent the twentysomethings for a few months! — as well as a couple local underground pubs, I decided to actually take a flier at the rock criticism I’d always wanted to do.

My biggest problem had always been trying to figure out how to break in. I wasn’t on any mailing lists where I could get CDs in advance because I hadn’t got anything published, but I figured that if I just sent a review cold, the odds were that it would have already been assigned to someone else; not to mention I’d be writing it far enough after the release date that it wouldn’t make any sense to publish in a magazine like SPIN, the place where I really wanted to be published.

But then Nirvana provided me with a weird option.

In early 1992, in order to coincide with a tour, Geffen released an EP called Hoarmoaning in Japan and Australia only. figured that it wouldn’t show up on anybody’s mailbox to be reviewed, and the maybe the pricey imports would preclude someone else from writing about it. So I went out and found the far-too-expensive Hoarmoaning , wrote up a review, and sent it to SPIN, hoping that what I wrote about the EP — two originals as well as covers of Devo, The Wipers & Vaselines.

And in their very nice rejection letter, the record reviews editor explained that while my review was very well-written, Nirvana was releasing a full-blown odds and sods album — to be called Incesticide — just in time for Christmas. And so, they’d obviously review it with one of their big guns then.

Naturally, I have no idea what I wrote about it, as I’m sure I just typed it up and sent it off. And so when Incesticide came out, I was already familiar with about half of it, though outside of “Sliver,” most of the best songs had already appeared on Hormoaning, my faves being the two Vaselines covers, “Son of a Gun” and “Molly’s Lips.”

The Vaselines were a twee indie-pop band from Scotland fronted by Eugene Kelly and Francis McKee, and their version of “Molly’s Lips” was all jangling guitars, beeping sound effects and McKee singing at the highest end of her register. It’s weirdly beautiful, where Nirvana’s take is more straightforward — noisy guitars dominate, and the instrumental bridge from the original is nowhere to be found.

This particular version was recorded for the John Peel show in October, 1990, and I believe that its the first released recording with their new drummer, Dave Grohl, who almost instantly made himself useful with massive rolls during the verses and setting up the chorus, as well as high harmonies on that chorus. On future posts, I’ll no doubt go on about how Grohl’s combination of pure pummeling and lighter-than-air fills was the catalyst for Nirvana’s greatness, but even this early on, he was already pure fire.