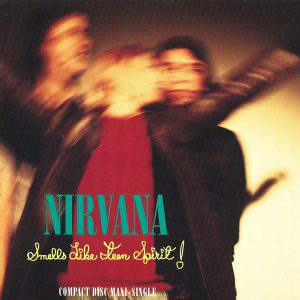 People might not remember this, but “Smells Like Teen Spirit” had a bit of a slow trajectory on its way towards changing, well, pretty much everything. It was released to radio on August 27, 1991 and to retailers on September 10, 1991, and did nothing. Well, that’s not exactly true: it was an instant hit on the left-of-the-dial stations, but went nowhere on commercial radio. In 1991, that was pretty much par for the course, of course: countless amazing singles from the previous decade-plus remained unheard by the masses, and there was no instantly apparent reason that “Smells Like Teen Spirit” should buck that trend.

So blame the video. You know the video: it’s playing in your mind’s eye right now. And what do you see? The cheerleaders in their anarchy uniforms, cute. The janitor, weird. The slo-motion effects, cool. Dave Grohl pummeling his drums, wow.

But most of all you see the manic intense charismatic energy of Kurt Cobain, screaming from the screen. Whoa? Who even is this dude? What even is this song? Wait, I wanna see that again. And after its graduation from 120 Minutes to MTV’s rotation proper, “wait, I wanna see that again” became “wait, I wanna hear that again,” and like a flood bursting through a dam that should never have been built, it suddenly felt like a decade of alternative culture — me, my people, our lives, our thoughts, our hopes and dreams and wishes, and most importantly, our music — suddenly burst into the sunshine, screaming “HERE WE ARE, MOTHERFUCKERS, ENTERTAIN US!!.”

A quarter-century later, in the middle of a world-historical crisis that threatens the very existence of our country at worst and will fuck it up beyond our lifetimes at best, I realize how silly it seems to celebrate a small takeover of popular culture that really only lasted a couple of years at best, but it really felt at the time like we were taking over the world, every single time that guitar riff kicked off.

That riff, right? Nicked from both the verboten “More Than A Feeling” and the played-out “Louie Louie” as well as a million other songs from the past present and future, “Smells Like Teen Spirit” kicks off lonely and almost quiet, springing to life with Grohl’s drums and layers of guitar, and just when you think it’s going to ride the groove it established, suddenly everything drops out except for Kris Novoselic’s bass, minimal drums and a single, echoing guitar, as Cobain laconically sings:

Load up on guns and bring your friends
It’s fun to lose and to pretend
She’s over-bored and self-assured
Oh no, I know a dirty word

And then as Cobain’s guitar turns into a quiet tornado he sings the pre-chorus:

I’ll admit: none of this really made sense in a linear way, but it sure as shit made sense in an emotional way, and both “I feel stupid and contagious” and “here we are now, entertain us” became almost instant catchphrases for me, especially during my writing at the time, when — depending on my mood (or level of drunkenness) — I’d scrawl one or the other in my notebook as I was reacting to the ever-changing turmoil in what turned out to be the last year of my 20s.

As did the second verse, which didn’t have any catchphrases, but cut me to the quick.

“I’m worst at what I do best” was something that I could totally relate to as 1991 crashed into 1992, and I realized that I’d been ignoring what I knew I did best — write — for what I wanted to do most, play the drums. And while I alternated doing both for much of the year, it turned out that by the end of the year, I really wasn’t doing either, having failed at keeping any momentum on either.

Meanwhile, no matter who’d they’d been in the past, Nirvana formally announced their pop intentions with the guitar solo, with Kurt basically playing the melody of both the verses and the chorus, Beatles-style rather than going off into some kind of noise tangent. Which to be honest, were basically his two default modes: right now, I can’t remember a single sing where Kurt played an even semi-conventional rock guitar solo.

That solo — edited slightly for the radio single — set up the final verse:

And I forget just why I taste
Oh yeah, I guess it makes me smile
I found it hard, it’s hard to find
Oh well, whatever, never mind

That last line stuck with me the longest. A perfect postscript to just about any kind of feelings of sadness, despair and hopelessness I felt during much of 1992 — and for years afterwards — but it’s almost erased at the end of the song when Kurt does an extra bit of screaming at the end:

Once again, this all made way more sense on a molecular level than it did on an intellectual level. It was less important to know what exactly was was being denied, than the fact that all the denials were really taking a toll on Kurt’s voice, as he gets ever more desperate before finally crashing into a wall of feedback.

“Smells Like Teen Spirit” made it all the way to #6 on the Billboard charts, and was the impetus for Nevermind to knock Michael Fucking Jackson from the top of the album charts, to boot, on its way towards dominating most of the first half — at least! — of 1992, and of course, its still a fixture on whatever rock and roll radio still remains, hopefully still fucking with people the first few times they hear it, and still not buckling one iota from all of the weight that has been put upon it in the intervening years.