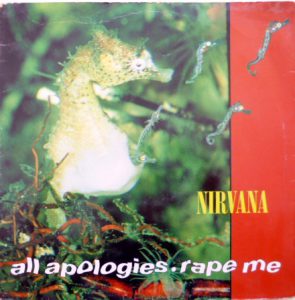 We’re nearly a quarter-century past that event, of course, and I still think constantly about the alternate universe where whatever pain and despair that he was going through passed before he could pull the trigger, and what the trajectory of his career might have been if early April, 1994 was just another bad patch that he’d eventually overcame.

But it’s just a series of unanswerable questions, isn’t it? From the shape of his music to his relationship with his wife and his child all the way down to the status or even existence of the Foo Fighters, it’s all impossible to know. Though I think that his music would have widened, his marriage would have flamed out and Foo Fighters would exist but not be nearly as huge — Dave Grohl’s side project would have been nice but probably not seemed as necessary or at least as interesting as it did in the mid-1990s.

What I do know is how I felt about Kurt’s suicide when it happened. And I know that because of social media.

In this specific case, that social media was the Replacements and Bob Dylan message boards on Prodigy, one of the walled gardens online in the early 1990s. I think that Prodigy came with my first PC, which I bought in 1993, and I got online and immediately went to look for other Replacements and Dylan fans, just like real life. And I met people back then who might even be reading these words, my first online communities. The first place I was ever “barefoot jim,” which I still use 25 years later.

And so, it was to those communities that I wrote these words (edited only for spelling):

"What else can I be/all apologies"
-- Kurt Cobain

Kurt Cobain never got a chance to make his Imagine.

You're gonna read and hear a lot of Lennon/Cobain comparisons in the next few days -- which is appropriate, but a little disingenuous. The worlds which spawned the Beatles and
Nirvana, while separated by only a generation, might as
well have been different dimensions. But since Nevermind
is the X (my) generations Sgt. Pepper -- the album that
changed the pop world forever (and we aren't just talking
about grunge here -- no more than you can reduce the impact
of Sgt. Pepper to psychedelia), that completely turned pop
music upside down, and crystallized us, if only for a few
moments. But I ain't gonna convince any Boomers about
Nirvana, any more than they could convince their parents
about the Beatles.

But Lennon's death always fascinated me, though it ever
affected me emotionally -- maybe his best work was still in
front of him, maybe not. But he was my Dad's age, and he
was writing about his life, not mine. Kurt Cobain was my
age, and in his elliptical style, his concerns echoed my
concerns. "Here we are now/Entertain us/I feel stupid and
contagious." I've never had an artist my age whose art
affected me as much as his did die on me. All of those
albums and songs and concerts wrenched away forever. I
never even got to see them: I was finally going to go to a
Lollpalooza this year cos they were playing.

Now I know how a lot of people felt about John Lennon.
This bites.

I called my friend Tim in London, and he -- like so many of
us -- was saddened and shocked, but not particularly
surprised.

In some respects Nirvana were victims of not so much
their success, but the anti-success tenets of the
underground from which they were spawned. For them to get
this big -- stadiums of people singing "Rape Me," a highly
personal song about his stardom -- was almost a betrayal of
principles. Everybody wants as many people to hear as much
of their music as possible, they just don't want to put up
with all of the stuff that surrounds it, and if a band gets
as big as Nirvana, they're automatically assumed to have
"sold out," whatever that means. A stupid and pointless
backlash from former supporters. Ack.

Didn't he realize that by offing himself he's forever
enshrined himself with the dread "spokesman for his
generation" tag he's always derided?

Everything was changing in the spring of 1994. I was unemployed, having left Video Zone; I wasn’t playing in any bands, though I had hooked up with a local publication called Kade and doing writing for them; I was in denial about my feelings for Rox; the Wild Blue closed, changing the scene forever, and I just felt like I needed to start my life over. And, for whatever reason, Kurt joining that stupid club was at least partially a catalyst for that.

And so, before that spring was even over, I’d moved to the Bay Area.

The central riff of “All Apologies” twists and turns around itself, nearly as elliptical as some of Kurt’s lyrics, seemingly without a fixed starting or ending point, and yet providing a perfect setting for an amazing set of lyrics where Kurt questions the meaning of his own existence.

Kris Novoselic is swirling around the riff while Dave Grohl is playing almost a stutter-step with his kick drum, snare and one of his toms, totally staying out of the way, in order to allow cellist Kera Schaley to swirl around the verses.

No cello on the choruses, though, which ramp up the electric guitar — as was the fashion at the time — for a chorus that starts off cheery and ends up, not so much.

There’s some more nice Grohl stop-time work at the end of that first chorus, as Cobain screams “MARRIED” the whole song comes to a screeching halt, and Grohl hits his drums in unexpected ways before and after Kurt comes back with “BURIED.” And in fact, the second time around, they toss in a couple of extra “MARRIED”s just to set up the song’s coda, which Kurt announces with a half-bemused, half-sarcastic and half-sincere “yeah, yeah, yeah, yeah!” like he was goddamn John Lennon or something.

At first that coda is just louder and fuzzier guitar on the riff and a steady beat, but then, as if rising from being buried, you start hearing a chanting, Cobain and Grohl harmonizing.

In terms of repetition, it’s kinda like the end of the Buzzcocks’ “I Believe“, when Pete Shelley loses his mind and sings “There is no love in this world any more” over and over again. A crucial difference is that Shelley mixes up how he’s actually singing the phrase while the musical backing remains exactly the same, while Kurt & Dave sing it exactly the same while while the music around them continually changes.

So at first, they’re surrounded by a swirling cacophany of guitars, drums and even the cello, but soon, it starts fading — the guitars are getting less loud, the drumbeat a bit more steady, though there’s some weird percussion for a bit, and eventually even the semblance of a beat disappears as the guitars fizzle into feedback while Kurt & Dave are still chanting.

Unless it’s “All in all is all we all are,” which I hear half the time. Once again, this is all stuff that hits me on a non-linear level. I know exactly what “There is no love in this world anymore” means, but “all in all is all we are” is a bit trickier, though some smartypants on Genius suggests it’s a Buddhist quote about the interconnectedness of things, so sure, why not?

To me, it was haunting and lovely enough that I didn’t really care what it meant, striking the balance between the happiness Cobain professed that the song was about and the sadness that lurked underneath even his cheeriest songs.