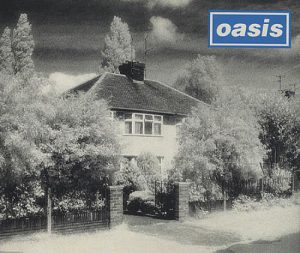 When I first came up with the Certain Songs idea, about a decade or so ago, it wasn’t originally about my writing about my favorite songs, but rather was even more specialized: it was going to be about songs that reminded me about specific periods or even incidents in my life.

That really didn’t go anywhere, so I did a couple of posts and retired the idea until four years ago, when I resurrected the name and changed the concept to whatever it currently is. After all, not every single song that I love or wanted to write about had a memory moment attached to it.

That said, there are still songs that almost instantly take me back to a specific time and/or place, and none more so than “Live Forever.”

May-beeeeeeeeeee
I don’t really wanna know
How your garden grows
‘Cause I just wanna fly
Late-leeeeeeeee
Did you ever feel the pain
In the morning rain
As it soaks you to the bone?

It was the spring of 1995. I was living a block away from Lake Merritt in Oakland, and Rox & Jimmy were living in their cool apartment in Hollywood on Hollywood Blvd. At that point, Rox & I were on a cadence where every couple of weeks, we’d take the $29 Southwest flights back and forth from Burbank to Oakland to spend the weekends with each other, exploring the Bay Area or Los Angeles as we tried to figure out what the next steps in our lives were.

And at some point while we were sussing all of this out, I bought Definitely Maybe, and it became an instant staple anytime Rox, Jimmy & I hopped into her red Mustang to run around Los Angeles — which, to paraphrase Lee Ranaldo, was the most confusing place I’d ever been to — looking for places to hang out or eat or shop.

And so, Jimmy & I would annoy the shit out of Rox by singing along with “Live Forever,” even — as Rox just pointed out as I was verifying this memory — when the song wasn’t on her car stereo. It was too much fun trying to imitate the maximum Liam Gallagher sneer randomly singing “Mayyyy-beeee” and “Laaaaaaate-leeee” and of course still feeling like we would live forever.

We’re two decades past that, but I still think that if “Live Forever” isn’t the greatest song that Noel Gallagher ever wrote, it’s pretty damn close. That stately kickdrum / floor tom / ride cymbal opening is utterly masterful, and when Liam comes in on those verses, it’s pure gold: he almost sounds empathetic, a quality one doesn’t normally associate with Liam Gallagher’s vocals, but there it is.

There is also how he climbs the ladder on the chorus, getting ever more excited as he works towards the kicker at the end.

The break into falsetto at the end of the chorus is at once beautiful and deeply vulnerable.

“Live Forever” was musically inspired by the Rolling Stones “Shine a Light,” as well as Noel Gallagher’s disgust with rock stars — particularly Kurt Cobain (who was still alive when it was written and recorded) — who were constantly bitching and moaning about being rock stars. As anybody who is paying attention will know, I loved Cobain and I loved Nirvana, but all of the negativity could be a drag at times.

The genius of “Live Forever” is that it didn’t call anyone out — it wasn’t like the lyrics are all “fuck you sad sacks” — and just stated the with a soaring ode to positivity.

Also genius: Noel Gallagher’s myriad guitar parts. Check out the note-perfect solo, spinning around the melody line without ever quite landing on it. Or his long solo at the end, after the final restatement / repetition of title track.

Because flash guitar solos were never the point of Oasis, Noel Gallagher has always been underrated — if he’s even rated at all — as a lead guitar player, but listen to his little licks as Liam chants “gonna live forever,” as well as his final bit of liftoff that sends “Live Forever” into the stratosphere.

In early 1995, this was all a revelation: I never could understand how Oasis was slagged for being unoriginal: to me, they took all of their British Invasion roots and iconography and then filtered it through some of the great British bands since then: Sex Pistols, The Smiths, even the Stone Roses to come up with something that maybe wasn’t perfectly original, but could only be identified as Oasis.