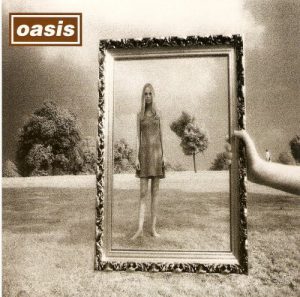 What was the tipping point with “Wonderwall”??

When did it transform from a massive, but slightly silly, worldwide hit single to a song that Slate recently declared to be part of the “New American Songbook,” sandwiched between two other songs written by non-Americans, “Rolling in the Deep” and “I Want It That Way.”

I mean, how did that happen? While in the U.K, “Wonderwall” was just one of nearly two-fucking-dozen Top 10 singles they charted in the U.K in their 15 year career — and shit, it didn’t even get to #1 there, like eight of their other songs did — here in the U.S., “Wonderwall” is quite literally the only Oasis song most people even know.

And yet, “Here’s ‘Wonderwall'” is a long-time meme that directly addressed the ubiquity of “Wonderwall,” the fact that in the two-plus decades since it cracked our top ten, it’s never really gone away. Proof of that fact: it is currently the most-streamed song from the 1990s on Spotify, with over half a billion streams. Add to that another quarter-billion YouTube streams, and you’re talking about a song that crosses all demographics, all musical tastes, and has wiped out all resistance.

And yeah, while the verses are a bit word salad-y, and “wonderwall” is a nonsensical word that Noel Gallagher stole from an obscure experimental George Harrison album, you still know exactly what it that chorus means to you and you know exactly what “you’re my wonderwall” means, even if you sing it like Liam does: “waaanderwahhh.”

Which is part of the appeal, of course. Along with the simple chord changes, skittering drum beat and the coloration of the mellotron, which fills out the sound without overstuffing it. And in fact, “Wonderwall” sticks out like a sore thumb on (What’s The Story) Morning Glory?, and not just because there aren’t any crunchy guitars on it.

OK, mostly because there aren’t any crunchy guitars on it. But also, compared to the kitchen sink mixes that dominate the rest of the album, the production of “Wonderwall” is much dryer and more straightforward, while still remaining dynamic, starting from just acoustic guitar & vocals and ending up with a relatively full sound by the end, which features Liam and Noel singing the chorus around each other.

And in the end, I think it’s the ambiguity and the instant-on of the melody that made “Wonderwall” into an unlikely single, and an even more unlikely classic.