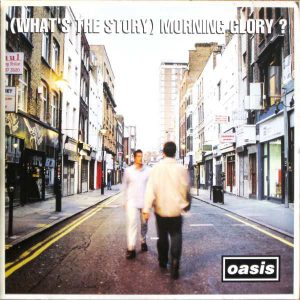 Oh fuck yeah. I love this song so fucking much, from the opening near-industrial guitar stabs to the massive hooks in the middle to wall of sound at the end, “Morning Glory” just kills me. Brit-pop? More like Brit-ROCK!

With a riff that splits the difference between Neil Young’s “Hey Hey My My (Into the Black)” and R.E.M.’s “The One I Love,” and a druggy lyric that crashes into a desperate chorus, “Morning Glory” is the sound of what happens when you ingest the exact right amount of cocaine.

Like seemingly all of Noel Gallagher’s greatest songs, “Morning Glory” is three parts repeated endlessly: a verse, a pre-chorus (unless it’s the chorus) and a chorus (unless it’s the post-chorus). Lather. Rinse. Repeat. Of course that might just have been to make it easier for Liam to remember words he didn’t write.

The thing is, on “Morning Glory,” any one of these would have been good enough, but putting them all together into a single song, and then cranking the guitars to planet-killer, it’s a pure sonic overload, but if forced by aliens to choose, I’d have to go with the chorus (unless its the post-chorus).

It’s the “welllllllllllllll” that utterly slays me. Like Liam (and Noel, sneaking in on the harmonies near the end) really wants to know what the story is, when we all know that he doesn’t really give a shit. And in fact, he’d probably rather not be bothered talking to you in the first place. He’s just asking to be polite. Or what passed for polite for one of the Gallagher brothers. And in fact, live, Liam didn’t even bother singing it, handing it off completely to his brother.

After that first chorus (unless its a post-chorus), “Morning Glory” comes to a dead stop, tumbling over itself while all of the guitars bounce off of the walls, before crashing into each other and restarting the song, which has somehow gotten even louder even though they were already the loudest things ever.

So they repeat everything over again, as is their wont, and at the end the guitars just keep coming and coming and coming — a blurry incandescent haze of white noise, so loud that the band needed to bring a helicopter into the actual fucking studio just to tamp them down.

Of course, this utter sonic overload was completely and totally unnecessary, not to mention pretty fucking ridiculous, and yet, all these years later, I still get a complete and visceral rush from it every single time.

And in fact, it was clearly “Morning Glory” that spurred the blurb I submitted with my 1995 Pazz & Jop poll ballot, which had the album at #1 (with 25 points), and articulated exactly how I felt after a full year of immersing myself in their music.

On the surface, (What’s the Story) Morning Glory? is just big dumb derivative rock and roll — as a matter of fact, under the surface it’s just big, dumb, derivative rock and roll. That’s why it rules. It has no significance whatsoever — socially, politically, intellectually, or, for that matter, even to the future of rock and roll itself. Not for a second does it pretend to have any value beyond sounding absolutely wonderful: these maniacal Britfucks aren’t beholden to any subculture, any scene, anything beyond their precious ambition. All they want is to be the greatest rock and roll band in the world.

In a rock era dominated by Americans with huge agendas, that sort of ambition could only come from the U.K., where the ascendance of alternative hasn’t turned their world upside down. And while five years ago, I might have laughed at such an ambition, and five years from now, I might wonder what I ever got from Oasis in the first place, right now, to me, they have the only attitude that makes any sense whatsoever. Furthermore, it’s neither buoyed nor encumbered by the antics of the people who created it — I couldn’t give a fuck if Noel or Liam Gallagher overdose or get murdered or commit suicide or break up the band or just make shitty records from here on out. I just can’t be bothered to care about these people. All I need is what I got right now and that’s this question: “What’s the story morning glory? Well?”

And honestly, the only thing that I was wrong about, or would take back 23 years later, is the assumption that I would burn out on Oasis in the same way I burnt out on, say, The Alarm or Cheap Trick. I obviously didn’t, as you’re going to see. Indeed, I enjoyed nearly all of their records — with the exception of their final one, and even that one had “The Shock of the Lightning,” which was as good of a single as they ever released — and if they reunited, I’d be right there in line to buy that, too.