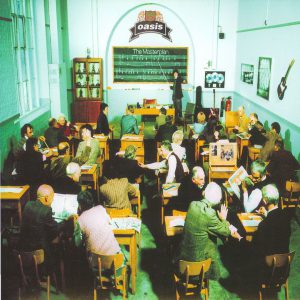 And in one of their greatest songs, the b-side “Acquiesce,” Liam & Noel trade off vocals in a way they would very rarely do. With The Who, of course, this was part of how it worked from the very start: you could often hear Pete Townshend sing bridges on songs like “Circles,” and by their second album, Townshend was writing multi-part, multi-character songs that needed multiple voices, so it became part of even their non-opera songs that Pete would show up singing a bridge or verse or even a chorus: “Relax,” “Naked Eye,” “Baba O’Riley,” “The Punk and The Godfather,” etc.

But that wasn’t really how it had ever worked with Oasis — they were more like The Kinks, relying on the brotherly harmonies, or the occasional song Noel sang all by hisself — so Noel when stepped out and took the chorus of “Acquiesce” after Liam sang the verses, it felt like a fucking revelation.

“Acquiesce” is a b-side. It originally came out as the b-side of “Some Might Say,” a few months before (What’s The Story) Morning Glory?, but it says here that if they’d put it on the album — instead of, say, “She’s Electric” — than (What’s The Story) Morning Glory might be my fav-no, I can’t even go there. It’s impossible. Noel Gallagher had a buttload of amazing songs, which no doubt goosed sales of their singles in the U.K., as every single had at least one song that couldn’t be found anywhere else.

And “Acquiesce” is the greatest outta all of those songs: and in fact, except for “Live Forever,” “Roll With It” and “Morning Glory,” it would have been the best song on either of their first two albums, or any of the other ones for that matter.

With a strutting opening that features glimpses of “Morning Glory,” and a riff / beat combo that was almost menacing, Liam Gallagher sings his frenemy’s lyrics about friendship.

And then, here comes Noel Gallagher, singing a chorus that has always been interpreted as being about he and his brother, an interpretation that he’s always denied, but still seems spot on.

It’s almost a shock to hear Noel’s crisp and clear voice after Liam’s usual swaggery sneer, but it’s a brutally beautiful juxtaposition, especially how he show off the internal rhymes of his lyrics — “neeeeeeeeeeeed,” “be-leeeeeeeeeeeeve” “weeeeeeeeeeeeeeeeeee’re” — holding the vowels as long he possibly could. And, in fact, you wonder for a second whether they even needed Liam.

But of course they did. Especially in the early days, they needed Liam’s vocal sandpaper to rough up the pretty melodies that would flowing out of Noel’s songs. That juxtaposition was always the subtext to their music. And for one glorious moment, “Acquiesce” turned it into text.

In the end, it’s all Noel, singing “we belieeeeeeeeeeeve” over and over again over slightly less than the usual wall of guitars until “Acquiesce” stumbles to its ending.

Of course, I didn’t hear this in 1995: while there were always import Oasis CD singles at Amoeba records, they were incredibly fucking expensive, and there were often multiple versions, to boot, so I didn’t hear “Acquiesce” until it showed up on The Masterplan in 1998. And by that time, things were kinda different between me and Oasis.