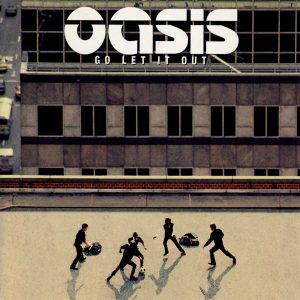 Then, when it became time to record the album, Noel Gallagher had a bit of a case of writer’s block, and on top of that, both rhythm guitarist Paul “Bonehead” Arthurs and bassist Paul “Guigsy” McGuigan — both founding members of the band — left early on in the sessions. This required Noel to record nearly all of the instruments except for the drums, where Alan White was still sticking in there.

And the resulting album, 2000’s Standing on the Shoulder of Giants, was probably their nadir, full of unmemorable mid-tempo tunes that seemingly flowed from the following question: what if psychedelic pop songs, but not 7 minutes long? While it was a reinvention of their sound — none of the songs featured the needle-pinning plethora of fuzzed-out guitars that had been one of their prime sonic characteristics — outside of Liam’s trusty sneer, it wasn’t a particularly good reinvention.

Except, of course, when it was, such as the lead single, “Go Let It Out,” which was a bit of a cheat, because it was a total head feint on the overall quality of the album.

One of the things that had happened in the post-Be Here Now interregnum was that Noel — after having worked with the Chemical Brothers on the song “Setting Sun” in 1996 — had decided that there was a definite connection between the electronica that was threatening to take over the U.K. in the late 90s and the psychedelia he’d always loved, and so the first thing you heard on “Go Let It Out” was a sampled drum loop, over which Noel stuck a big ole acoustic guitar.

From there, “Got Let It Out” layers on the instruments — bass, electric guitars, mellotrons — in the usual reliably pleasing fashion while Liam chanted the chorus.

The back half of “Go Let It Out” is reassuringly overstuffed: Liam singing the title over and over, Noel tossing some leads, the mellotrons fluting away in the background, and finally one last cool guitar riff taking it to the fade.

After over two years, Oasis had made a single that was definitely a new direction and yet retained many of the elements that people loved about them in the first place. And it was good enough that in the U.S., it got a decent amount of radio play, and in the U.K. became their fifth #1 single, their eleventh top 10 single, and — in case you’ve always assumed their popularity ever flagged in their home country — the first of a remarkable streak where they had a dozen top 10 singles in a row over the rest of the decade.

“Go Let it Out” official video