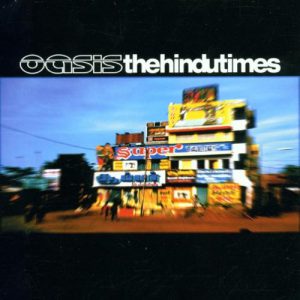 That strength was evident from the lead single, “The Hindu Times,” which sounded and felt like a classic Oasis single: a massive mid-tempo stop with an instantly-memorable guitar hook and a chorus that said nothing and everything at the same time.

I probably haven’t praised Liam Gallagher’s singing enough during these posts, but while his voice was never technically the best, he always had what every great rock ‘n’roll frontman had: his own style, swagger and attitude. At first, of course, when they were on their way up, that was all he needed. But of course, growing up happens to everybody, even Liam Gallagher, and on a song like “The Hindu Times” he just kills it, wrapping his voice around the internal rhyme of “soul” and “roll” and alternating between pretty and raspy when he sings “and I get so high I just can’t feel it.”

And as for Noel, he was back in his element, extending the main guitar riff during the solo, layering about 150,000 voices singing “ahhhh” in the post-chorus, and basically reveling in what was clearly a back to basics move after two albums of dicking around. And obviously, at least in the U.K., it was right on time, as “The Hindu Times” was their sixth #1 record in their homeland. Here, in the good old U.S.of A., no self-respecting radio programmer in 2002 was going to air a song called “The Hindu Times,” and it didn’t even chart on alternative radio. Had it be called “Your Rock ‘n’ Roll,” things might have been different.