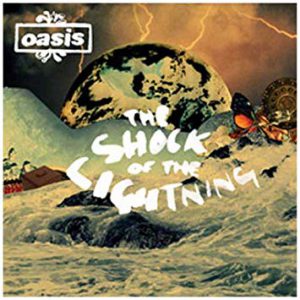 An uptempo raver, full of hard-charging guitars and a solid Zak Starkey beat, “Shock of the Lightning” is easily in the top tier of Oasis singles, sneaking in one last Beatles reference on the chorus, because why the hell not at this point.

But man, what a chorus! Instantly catchy, natch, but it’s stuck in my mind as much as any one that Noel ever wrote.

There is so much going on here: the way that Noel supports on “It’s all in my mind” the wink on “magical mystery” and at the end Liam’s extension of “time-e-ime-e-ime-e-ime-e-ime” to close the whole thing as the guitars somehow get even louder. As always, it doesn’t really mean anything, but as always, it sounds fucking great.

After a couple of verses and choruses, there’s a bit of a breakdown, where there guitars drop off and allow Zak Starkey to build and build into a tremendous drum roll that is followed by Noel quickly soloing the melody line and then straight back to Liam who just sings the chorus one last time.

“The Shock of The Lightning” wasn’t the final Oasis single, but it was the final great Oasis single, as thrilling as any song this top singles band ever released, and a helluva great way to go out. And what the hell, I’m going to give Dig Out Your Soul a proper listen now.

In 2009, Oasis finally broke up, and in the intervening decade, each Gallagher brother has put out three studio albums — and Andy Bell reformed Ride, to boot — none of which were as good as Oasis, though it’s always fun to hear Liam sing and Noel put songs together, but of course they need each other to fully wipe me out. Maybe at some point, they’ll figure it out. All in good time.

“The Shock of the Lightning”


“The Shock of the Lightning” Official Video