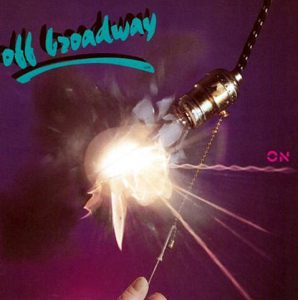 One of the upshots of that — especially before they tightened their format — our local rock station, KKDJ dipped their toes into power pop. Obviously, “My Sharona” was the standard-bearer, but it also meant that you might hear the Paul Collins Beat or 20/20 or Shoes on the radio occasionally, and you definitely heard “Stay in Time” by Off Broadway.

Off Broadway came from Chicago, and their lead singer with the annoyingly familiar voice was named Cliff Johnson, all of which are facts that I’m gleaning from the internet as I write this piece, because I don’t remember fuck-all about this band — and I bought the album! — outside of the chorus of “Stay in Time”, which is indelibly etched in my brain, as it’s indelibly etched in the head of anybody who’s ever heard it.

Stay in time, boy,
Don’t get out of line, boy
Take a stand, don’t get out of hand
Ooh dooby doo
Use your head you might as well be dead
If you don’t, boy!

I know that a couple of you will consider this a power pop classic, with the tom work on the chorus, the handclaps interspersed throughout, and the combination of clinkity-clink guitars and the power chords that swoop in through out., but while I think its a great song — obviously! — my only problem with it is that sounds a bit faceless and generic, perhaps an offshoot of their being signed by Atlantic.

That’s musically. So what makes it unique is the delivery by Johnson: not just the repetition of the word “boy,” (which, honestly, was both a hook and an irritant), but also that little “ooh dooby doo” in the middle of the second chorus, seemingly done just to amuse himself.

In the end, Johnson repeats “stay in time, don’t get out of line” while the drums and guitars crunch around him in perfect formation, until he closes with “use your head, you might as well be dead, dead, dead!” as the song crashes to a halt.

“Stay in Time” was a minor minor hit here in the U.S., reaching #51 on the Billboard Pop charts, probably a reflection of the confusion of the times: a little less airplay, nothing at all, a little more airplay could have made it a top 30 it, even higher. But nobody knew what the hell was going on, as evidenced by the time that Tim and I saw Off Broadway play the Warnors in Fresno in early 1980.

I don’t remember anything about that show, except for one thing: somebody thought it was a good idea for them to open for UFO, who I was still a fan of, even though Michael Schenker had left. That was one of the weird things of the time: new wave bands opening for corporate or hard rock bands. So you had The Cars opening up for Styx, which somehow worked, the Only Ones opening for The Who, which also worked, but also disasters like The Fools getting booed off the stage when they opened for Van Halen.

As far as Off Broadway opening for UFO, I have no memory, so let’s assume that it went fine!!