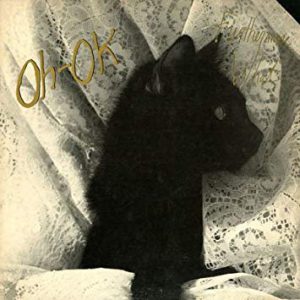 I’m 98.674% sure I’ll talk about the impact that R.E.M. had on our little tribe in a lot more detail at some point next year (!!), but for now all you really need to know that by the time 1983 was even half-over, we were mad for just about anything R.E.M.-related.

So you can only imagine the excitement when Oh-OK’s second EP (we never heard the first), Furthermore What, showed up at KFSR. Not only was it produced by Mitch Easter, whose Let’s Active afoot EP was also a big deal, but the bassist was Michael Stipe’s actual sister, Lynda.

While most of the music on the EP angled like Pylon more than jangled like R.E.M., the opening track “Such N Such” was hooky and bouncy enough to entice just about anyone, featuring innocently straightforward lead vocals from Linda Hopper and impressive jangly guitar from newest member Matthew Sweet.

And while Lynda Stipe was the the news hook for Oh-OK back in 1983, it was future Magnapop vocalist Hopper and future pop icon Sweet who are probably the reason that their music is still so readily available 35 years later.

None of which, of course, we knew in 1983 every single time Lynda Stipe sang the opening background vocal: Do I really need this?” coming down hard on the word “this,” kicking off the hypnotic tangle of Sweet’s guitars, Stipe’s loping basslines and drummer David McNair’s ever-changing beats that makes “Such N Such” a compelling listen.

Also compelling was the story that Hopper was telling:

There was this party I went to that was oh
No big event really, I called it my own
But to be sure, had I not gone
I would have never known

Down at this party, rapture and lust
She said such n such, oh really not much
But to be sure, had I not gone
I would have never known

With Lynda Stipe singing all around here — elongating “party,” chiming in on “really” and later on amplifying the sense of discovery with a “never never never known” and breaking up the whole song with an angelic bridge that ends with the emphatic “do I really need this?”

And so while Oh-OK really had fuckall with the great songs that Hopper would do with Magnapop and even less with what Matthew Sweet does, it was still a fascinating look at their youth and a song that instantly transports me back to my youth.