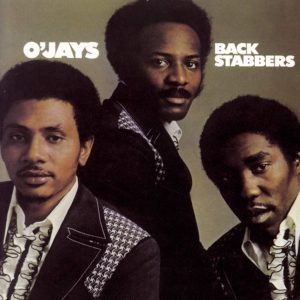 As an adult, the smooth Philly soul that came out from Kenny Gamble & Leon Huff in the 1970s has always been kind of a blind spot for me, as from my teenaged years on I’ve tended to avoid music that has “smooth” attached to it, regardless of genre.

But as a kid, I loved a shitton of the singles that came out of that factory, especially the ones by the O’Jays, who rode on top of Gamble & Huff’s massive songscapes like the long-time pros they so obviously were. And as a matter of fact, they’d been kicking around since the late-1950s, but it wasn’t until they hooked up with Gamble & Huff that they had any kind of pop success.

And “Back Stabbers” was the first flush of that success, one of those early-1970s soul songs that took its time to establish its groove, juxtaposing latin percussion instruments and rhythms with tasteful guitar licks and soaring strings, until 40 seconds into the song, Eddie Levert, William Powell and Walter Williams launch into the chorus.

That’s of course, one of my favorite tricks — leading with the chorus — and the contrast of rougher soul harmonies over the silky instrumentation gave “Back Stabbers” a really cool tension. Obviously, as a vocal harmony group, The O’Jays weren’t going to get too rough with the vocals, but throughout “Back Stabbers” the vocals alternate between the just-gravelly-enough leads of Levert and the ongoing gorgeous responses of Powell and Williams.

Add that to the universal message of paranoia that “Back Stabbers” featured in its lyrics, and it was an almost irresistible single, topping the R&B charts and making it to number 3 on the Billboard charts. “Back Stabbers” was just a few months before I started listening to KYNO-AM religiously, so I experienced it more as an oldie than as a massive hit single, but I still heard it a lot.


“Back Stabbers” performed on Soul Train