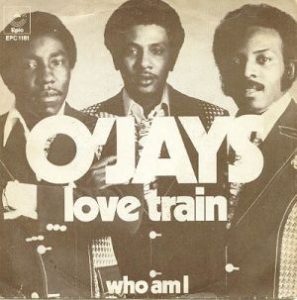 The answer, of course, was both: after all, it wasn’t as if the O’Jays were writing their own songs. Instead, they were just plugging their vocal chops into a song that Kenny Gamble & Leon Huff had crafted to within an inch of its life.

This, of course, is a time-honored pop formula that predated the O’Jays and will persist until popular music is no longer a thing, so it’s always up to the artist to personalize it with their vocals, which is exactly what the O’Jays did with “Love Train,” which should be annoying and cloying on every single level — and hell, it might be to some of you — and yet and yet, when Eddie Levert sings his leads over the backing vocals of William Powell and Walter Williams, it instead becomes powerful and sublime. Especially since they once again lead with the chorus.

It’s also a total and complete earworm, sporting a hook that was instantly indelible and then hammered into your head by the harmonies of Powell & Williams, who never even once falter even though they’re basically singing the same thing throughout the entire song.

In an interesting production twist, Powell & Williams are placed slightly lower in the mix than you’d normally expect, and unlike the rest of the utterly state-of-the art production, their vocals are stuck dead in the middle, almost low-fi and mono, centering the rest of the song on their vocals. And its true: when Levert is listing nations and people he’d like to join the train, all you want is to get back to that chorus, because if anything is going to convince you that a thing called “a love train” is a good idea, it’s that chorus.

And so when your humble correspondent started digging his heels into popular music in the spring of 1973, “Love Train” happened to be one of the biggest songs on the planet, meaning that it dug its claws directly into my soul. And of course, became a phrase that passed into the popular culture. 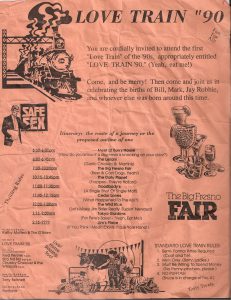 Years later, in the late 1980s, the boys in my social circle had an idea where we would get all dressed up — coats & ties! — and go to a bunch of bars that we normally would never frequent. And Nate came up with seemingly ironically hipster idea of calling it the “Love Train,” which he’s told me wasn’t that ironic as it happened to be his “song of the moment.” I think there were three Love Trains all told, the second & third of which ended up at my Wishon & McKinley apartment, and all I can say is that I’m very very very glad that social media didn’t exist in 1988.

In any event, here’s a flyer for the third Love Train, which I seem to recall didn’t even come close to fulfilling the incredibly ambitious schedule that was set because we wasted far too much time trying to procure, um, “supplies.”