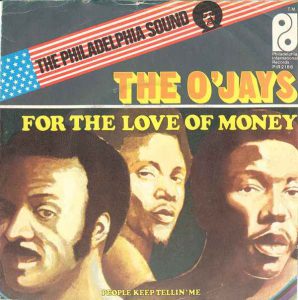 Even on the AM radio in 1973, you could tell just how weird and fucked-up the production of “For The Love of Money” was.

First off there was that bassline: weirdly echoing around itself; simultaneously creating and filling space around itself. And in fact, it was so unique that bassist Anthony Jackson ended up with a partial songwriting credit, which probably changed his life forever, as “For The Love of Money” is yet another one of those songs that has never left popular culture.

And so ironically, “For The Love of Money” is a nice rant against and/or celebration of the peril and pitfalls of capitalism, but ironically it no doubt made nearly everybody involved a shitload of money, and given its ubiquity, no doubt continues to do so.

But that’s OK: it’s a helluva song, weird as all fuck, getting across more on its weird production choices than anything else. All of that phasing on the hi-hats, like somebody had just discovered dub, the skittering jittery rhythms, ghostly wah-wah and of course the eerie backing vocals of “money money money money, mon-eeey” and “For the love of money” that anchor the song.

Those backing vocals are all done up in pre-echo — the same effect that Jimmy Page used for Robert Plant’s vocals at the end of “Whole Lotta Love” — so they glide in from the ether rather than attack you up front. On top of the slithering percussion and the echoing bass, The O’Jays sound like visitors from another dimension who have crossed over just to warn us of our evil ways.

Because it got by on groove and production and not so much melody, “For The Love of Money” wasn’t quite a smash hit on the level of “Back Stabbers” or “Love Train,” and “only” got to #9 on the Billboard charts.

“For The Love of Money”