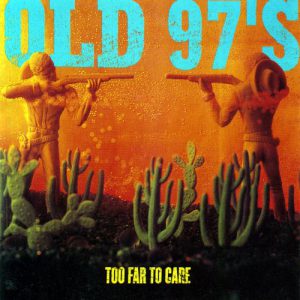 One of the most quotable songs in the whole Old 97’s canon, “Barrier Reef” is a winning mix of a huge-ass Ken Berthea guitar riff, a jaunty beat from drummer Phillip Peeples and a vocal from Rhett Miller that perfectly caught the ambivalence he was singing about.

And what was he so ambivalent about? As it turns out, a one-night stand that at least superficially went exactly the way he wanted it to go. Which was the problem.

Empty Bottle was half empty
Tide was low, and I was thirsty
I saw her sitting at the bar
Well you know how some girls are
Always making eyes
Well she wasn’t making eyes

Nevertheless, because he was thirsty, Rhett approaches her with one of the greatest lines in fucksong history:

So I sidled up beside her
Settled down and shouted, “Hi there!”
“My name’s Stewart Ransom Miller
I’m a serial lady-killer”
She said, “I’m already dead”
That’s exactly what she said

“A serial lady-killer” is, well, perfect. And clearly the best way to introduce himself to this particular woman. Though as the song progresses, you definitely feel like they’re both doing it to just be doing it, which becomes clear during the final verse, after they’ve gone back to her place to do the deed, and he’s not really into it.

Though not enough not really into it to actually, you know, not do it?

My heart wasn’t in it
Not for one single minute
I went through the motions with her
Her on top, and me on liquor
Didn’t do no good, well I didn’t think it would

On the chorus, as Berthea spins all manner of guitar noise in the background, Rhett Miller questions, well, everything.

What I love about “Barrier Reef” is that juxtaposition between the bright, bouncy music, and the deeply conflicted and melancholic lyrics. Especially because you make the assumption for all of his ambivalence about the poorly-executed one-night-stand that he just had, it ain’t gonna stop him the next time he sees the opportunity.