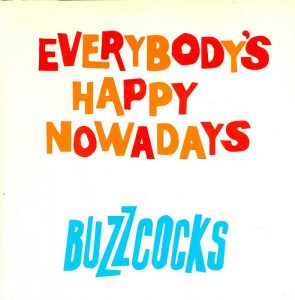 Figured that in the wake of Pete Shelley’s sudden and saddening death, I might write about a couple more of his Buzzcocks songs in the next couple of days. And then a couple of his solo songs when I get there (as I was going to do anyways), so here’s yet another highlight from Singles Going Steady, the mold-breaking “Everybody’s Happy Nowadays.”

One of the things that struck me about the Buzzcocks was that their albums were more experimental than their singles, and so I never loved the artsier first two albums Another Music in a Different Kitchen and Love Bites as I did Singles Going Steady or even A Different Kind of Tension, which is where I think they found the balance between punk pop and punk art.

I was so tired of being upset
Always wanting something I never could get
Life’s an illusion, love is a dream
But I don’t know what it is

But just before the chorus, something happens: the guitars start to shred, shred and shred some more and Shelley slips into a falsetto as he states:

And both musically and lyrically, that seems like pretty much it — alternating the slightly quiet verses with the noisier choruses — but it really isn’t. As “Everybody’s Happy Nowadays” continues forward, it’s slightly mixing things up, and so on the bridge of the instruments except for Maher’s kick-kick-snare-kick-snare pattern and Shelley chants:

It’s a bit of a foreshadowing on the varying repetition that climaxes “I Believe” where, if you’re not paying attention, you’re missing the fact that Shelley is continually changing his message on you. And so, at the end of “Everybody’s Happy Nowadays” he switches perspective and addresses us directly:

Bet you are tired of being upset
Always wanting something you never can get
Life’s no illusion, love’s not a dream
Now, I know just what it is

And, wham, just like that, “Everybody’s Happy Nowadays” goes from seeming cynical to seeming somewhat optimistic. All the while, the contrast between the three parts — the loping verses, the crunching choruses, the near-duet of the bridges — are continually being switched around, so you never quite know what’s happening next.

Not exactly your traditional single.

And even in the U.K., where “Ever Fallen In Love (With Someone You Shouldn’t’ve)” hit #12 and the the follow-up, “Promises,” made it to #20, “Everybody’s Happy Nowadays” barely scraped the top 30, the last of their singles to do so.