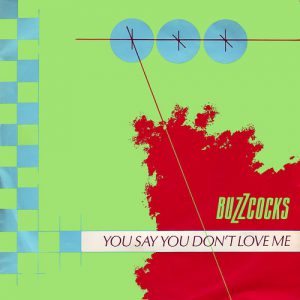 As I mentioned in yesterday’s post about “Everybody’s Happy Nowadays,” 1979’s A Different Kind of Tension was where they perfectly balanced their pop tendencies with their artier tendencies, and while I’m always going skew pop, I really did love many of the weird tunes like Steve Diggle’s thrashy “Sitting Round At Home,” Shelley’s droning “Hollow Inside” and the awesome title track.

Balancing that out was Shelley’s questioning “I Don’t Know What To Do With My Life,” Diggle’s hilarious fucksong “You Know You Can’t Help It,” and, of course, “You Say You Don’t Love Me,” which roars out of the box with about million hooks.

You say you don’t love me
Well that’s alright with me
‘Cause I’m in love with you
And I wouldn’t want you doin’ things
You don’t want to do
Oh you know, I’ve always wanted you
To be in love with me
And it took so long to realize
The way things have to be

With Steve Garvey’s bass doing a shitload of melodic work from the very start, “You Say You Don’t Love Me” could easily have been stuck on Singles Going Steady with absolutely no issues whatsoever. And, as a matter of fact, it just might be their most tuneful song, as it builds towards the chorus:

With Steve Diggle adding a guitar solo that skirts around the melody line and just a skosh of phasing at the end of the verses, “You Say You Don’t Love Me” is as straightforward as it is resigned. (And kinda woke, at least in terms of consent.)

And in the last verse, Shelley switches it up again.

And so that settles that, I guess. Unless, of course, he’s just trying to make the other guy feel better about not loving him, which is entirely possible, maybe even probable.

“You Say You Don’t Love Me”