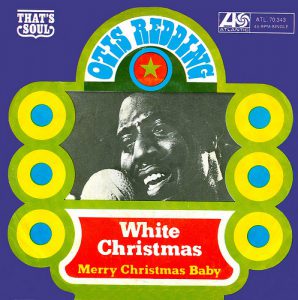 Happily, though, here we are, in the middle of Otis Redding, and it’s Christmas, so why the hell not?

Which sounds nothing like the version they cooked up with Otis, of course. With Booker T. Jones playing a lead organ line that inverts the verses of “Jingle Bells” and Steve Cropper slinking around his guitar, “Merry Christmas, Baby” is a hoot and a holler, listening to the radio, checking out their presents and kissing under the mistletoe, all climaxing with a stop-time bridge.

Santa came down the chimney
Half past three, y’all
Left all them good ole presents
For my baby and for me, ha, ha, ha

As always, Otis kills it during this part, especially on the “ha ha ha” which perfectly splits the difference between singing and laughing.

After that, it’s a couple of modulations, as Otis continues to list all of the reasons he’s having a wonderful time. It’s a total mood shift from what you normally expect from Otis Redding: he’s actually singing about having fun in the middle of a healthy relationship. It’s a Christmas miracle for Mr. Pitiful!