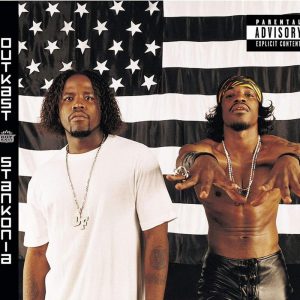 A light-hearted sounding song about a serious subject, “Ms. Jackson” should have probably drowned in its own internal contradictions and utter weirdness, but instead, it became a massive world-wide hit — a Top Ten song in 19 countries (according to Wikipedia) — and by early 2001, felt totally and utterly inescapable.

Which makes sense, because for all of its near-psychedelic weirdness, “Ms. Jackson” was a goddamn hook machine, so like obvious precursors such as “When Doves Cry” or “Strawberry Fields Forever” the hooks so overwhelmed the weirdness that the weirdness became part of the hooks.

Which is why after a quick introduction of the subject — Andre 3000 apologizing to Erika Baydu via apologizing to her mother — “Ms. Jackson” goes directly into its chorus.

Andre 3000 sings this a simple beat, a piano dancing around the “Wedding March” and a backwards sample of the Brothers Johnsons cover of Shuggie Otis’s “Strawberry Letter 23,” and there is so much going on. Check the difference between his multi-tracked “I’m sorry, Ms. Jackson” and the near-lone falsetto “I am for reeeeeeal” as well as the “hoo!” that both divides them and connects. That would be enough just by themselves, but then he gets almost sing-songy on “Never meant to make your daughter cry / I apologize a trillion times.”

On the verses, both Andre and Big Boi explain Andre’s side, veering between defensiveness and wistfulness, climaxing during Andre’s verse where he breaks down for for a second.

But after that, it’s all about the chorus, which comes in unexpectedly at times, like they knew that you knew that you needed to hear it once, twice, three times again and again world without end amen.