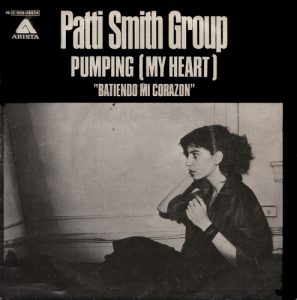 That said, you can’t fully overpower a force of nature like Patti Smith, no matter how many crunchy and squealing guitars you overdub, so when she was able to battle the production to a draw, the result was thrilling, especially on “Pumping (My Heart)” where she jumps on top of the guitars and Richard Sohl’s piano and takes everybody for a ride.

At the end, “Pumping (My Heart)” starts rising skyward getting higher and higher while Patti screams “total abandon!” over and over and over while the guitars rise trying to keep up with her but of course there’s no way they can, as the song ends up running away from you no matter how much you might wanna follow it.