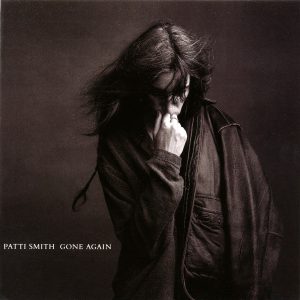 Then people started dying on her.

Early collaborator Robert Mapplethorpe went in 1989, piano player Richard Sohl in 1990, and in 1994 she was hit by the twin whammies of Fred “Sonic” Smith and her brother Todd. So, with the encouragement of super fan and longtime friend Michael Stipe, she decided to deal with her pain via her art and went back on tour, opening for Bob Dylan in 1995, and headlining in 1996.

By that time, of course, I’d pretty much assumed that I was never going to enjoy Patti Smith more than when I listened to Horses, but because there had been so many reports about how amazing her live show was, I figured that I’d take a flyer, and saw her at the Warfield in San Francisco in March of 1996.

And was totally and utterly blown away.

I won’t go into a whole lot of details — you can check out what I wrote at the time — but suffice to say that it completely rearranged my brain on Patti Smith, to the point when she put out Gone Again a couple of months later, I snapped it up.

While most people point to the long Kurt Cobain tribute, “About a Boy” or the rearrangement of Dylan’s “Wicked Messenger” as the highlights of Gone Again, the song that has long struck me is the hypnotic waltz “Beneath The Southern Cross.” In an interview, Lenny Kaye said that it was the first song they wrote together in the wake of all of the deaths, and that’s definitely a subtext in the lyrics.

The curve of the world
Whose bone scraped
Whose flesh unfurled
Who grieves
Not anyone, gone
To greet lame
The inspired sky
Amazed to stumble
Where gods get lost
Beneath the southern cross

Not as much as a traditional song as a wake, “Beneath The Southern Cross” is one of those songs that finds its pattern and then just sticks everything on “repeat,” forcing you to not just concentrate on the words, but to also notice any time things change. So after a few minutes, there are almost ghostly guitar rumbles, and jagged licks, and then, after the last verse, you hear a soft male voice singing a series of near-wordless wails that may or may not include “flllllllllyyyyy” at the very end. It’s gorgeous and chilling.

And it was Jeff Buckley, who was a huge fan — perhaps he got wind where Patti was recording from mutual friend Tom Verlaine — and basically stuck around the studio until he could record with Patti. After Buckley does his part, Patti sings “cross over, boy!” adding one last chilling irony to a song that was already suffused with transcending death.

“Beneath The Southern Cross”


“Beneath The Southern Cross” solo acoustic, 2017