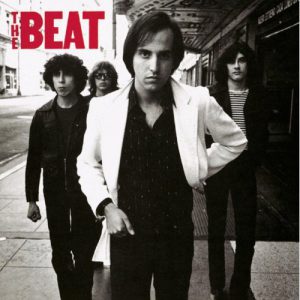 Anyways, I’m not sure I knew any of this in 1979 (we were still a couple of years away from the almighty “A Million Miles Away”) but what I did know was that it was pretty cool how all of the songs on The Beat kinda sounded the same — close-miked sparkling guitars, exquisite harmonies, straightforward beats — and yet each one was slightly different. So you had the 50’s reverb of “Look But Don’t Touch,” the bouncy beat of “I Don’t Fit In,” the almost-post attack of Nerves leftover “Walking Out of Love” and the dynamism of “Don’t Wait Up For Me.”

Don’t
Wait up
For me
Tonight

So the first time around of “don’t. wait up. for me.” , the words are as clipped as the guitars, and the guitars are as clipped as the beat. But the second time around, the whole band explodes into the song, up and down up and down, a virtual rollercoaster stopping and starting, and piling on the hooks at every conceivable moment, especially during the chorus, which might not even be a chorus.

Yeah I tried but I just can’t find a way
So I’m going so far, far, far away
I won’t be back
No matter what you say

There’s also a cool long guitar solo by Larry Whitman, which begins over the quiet part, and then just fully takes off and gathers so much momentum that even when the song tries to drop back down to the quiet part, he’s still flying. It’s a great contrast.