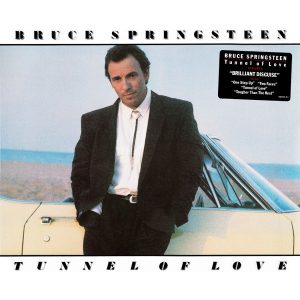 After the big gesture of Born in the U.S.A. and even bigger gesture of the simultaneously life-affirming and somewhat disappointing 5 disc live album, it was clearly time for Bruce Springsteen to scale it down.  Which was why Tunnel of Love was such a masterstroke.

For me, it came out at the perfect time: practically the moment that what had been my most intense relationship to date was coming to a protracted and painful ending. So it was a weird comfort for someone like Springsteen to admit massive failure in love despite his massive success in his career. And that was just the first song.

The one I loved most – got kind of obsessed with, really – was the beautiful “One Step Up,” which felt like it was describing my life to a tee, as on one hand I was learning to play drums and had been tapped to manage the Video Zone, but on the other hand I was sharing a room at my dad’s place with my brother Joe because the tumultuous end of that relationship had left me with nowhere to live.

I think that “One Step Up” contains Bruce’s most beautiful singing, especially on the second verse:

All of the bombast is gone: his singing is direct, personal and the catch in his voice when he sings “bird on a wire” quite possibly the most lyrical moment in his entire career. All of the sadness he’s trying to express is right there.

And maybe that sadness spilled over into the Tunnel of Love tour, as the 1988 show I saw at the Shoreline with Tom from Video Zone was the most down show I’ve ever seen (out of four, a very small sample size) by Bruce Springsteen & the E Street Band. Or maybe it was my mood. The summer of 1988 – like the Autumn of 1987 – is a top 5 Worst Time of My Life, so I’m not sure I can trust any of my reactions to the music I encountered then.

“One Step Up” Official Video