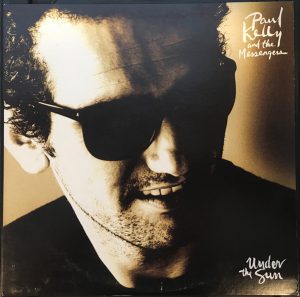 They got married early, never had no money
Then when he got laid off, they really hit the skids
He started up his drinking, then they started fighting
He took it pretty badly, she took both the kids

The first verse of “To Her Door” is quiet: Kelly strumming an acoustic guitar, drummer Michael Barclay sticking with his rims and pianist Steve Bull dancing around the words — in fact, Bull’s piano is the secret weapon of the song — and they maintain a quiet country-rock groove right through the first chorus.

At that point, as Barclay ramps the song with a build and guitarist Steve Connolly weighs in with a couple of twangy licks, “To Her Door” hits is full pace as an in-character Kelly rasps “Shove it, Jack, I’m walking out your fuckin’ door!” This is immediately followed the next verse, which describes the aftermath of her leaving.

She went to her brother’s, got a little bar work
He went to the Buttery, he stayed about a year
Then he wrote a letter, and said, “I want to see ya”
She thought he sounded better
She sent him up the fare

One of the things about “To Her Door” is the specificity of the whole thing. He didn’t just go to rehab, he went to the a rehab called the Buttery, and in the next chorus, he’s not riding a bus to see her, he’s riding on the Olympic bus line.

And then, and then, one of my all time favorite musical moments as Kelly sings “And his heart was singing like a lowdown guitar” followed by Steve Connolly playing the melody of the verse in a low-down guitar. It’s so fucking lovely, I almost can’t stand it, though eventually he takes off into the higher registers, setting up Kelly to sing the last verse.

He came in on a Sunday, every muscle aching
Walking in slow motion like he’d just been hit
Did they have a future? Would he know his children?
Could he make a picture and get them all to fit?

What happened? Did they reconcile? Did she reject him? The song doesn’t tell us, though — and how out of character is this for me? — unlike the unseen denouement in the aforementioned “Train From Kansas City,” I honestly think that these two crazy kids will make it work. I’m pretty sure this is the first time in the 1444 Certain Songs posts I’ve assumed a happy ending to a relationship song that doesn’t explicitly have one, but that’s just how much I love “To Her Door.”

“To Her Door” official music video